On June 11, the EUR/USD pair lost about 80 basis points after an unsuccessful attempt to break through the 161.8% Fibonacci level. Thus, the proposed wave 5 in 3 in C in B of the upward trend section is completed and wave 4 in C in B begins to form. If this is true, then the decline in quotes will continue with the goals located around the 11th figure or slightly lower, and the wave itself may take a three-wave form. Thus, I do not expect the resumption of the increase in quotes until the end of wave 4.

On Thursday, there were practically no economic reports and global news. A day earlier, the Fed held a meeting at which nothing remarkable happened either, except one. Jerome Powell and the entire Fed have provided new forecasts for GDP, unemployment and inflation for 2020 – 2022. And these forecasts turned out to be much weaker than before. That is, the Fed expects a more serious economic decline than during the last meeting. And such a position of Powell is completely unsuitable for US President Donald Trump, who is obsessed with “elections”, which means that as many Americans as possible should be lured to his side. However, how will he lure them if the economy collapses down, the country has the highest unemployment rate, and the labor market “lies”? Obviously, the only thing he can do is promise a brighter future. And as soon as Trump began to tell everyone that the US economy became the strongest in the history of the country under his administration, and recovery after the crisis will be quick, after which the US economy will become even stronger, Fed Chairman Powell spoke, who, in fact, said that there would be no quick recovery, but optimistic forecasts have not yet been confirmed. Powell is very afraid of the second wave of coronavirus and a possible new lockdown, so he believes that the future of the economy has too many uncertainties. Such rhetoric categorically does not fit Trump. He said that the Fed is too often mistaken and that “we will have a very good third quarter, an excellent fourth quarter, and one of the best in all of 2021.”

The euro/dollar pair is supposedly continuing to build the rising wave C to B. Therefore, I recommend buying the instrument with targets located near the calculated levels of 1.1406 and 1.1570, which equates to 161.8% and 200.0% Fibonacci for each new signal “up” MACD. At this time, the instrument supposedly began to build the correctional wave 4 in C to B, so the instrument may decline for some time. 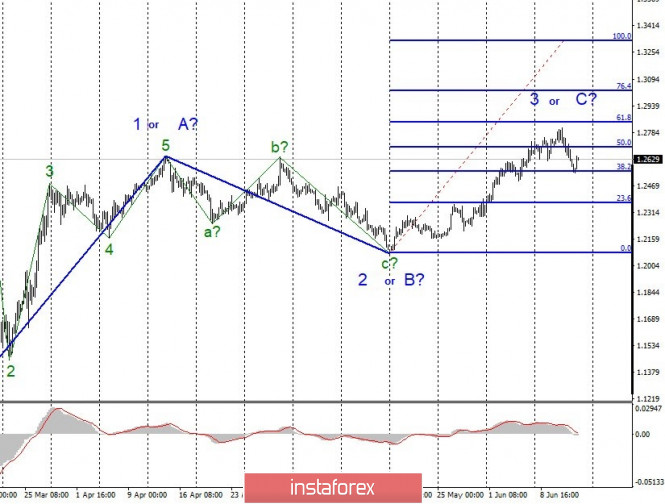 On June 11, the GBP/USD pair lost about 150 base points, but the current wave markings have not suffered any significant changes. Thus, at the moment, the construction of an internal correctional wave of 3 or C, which does not seem to be fully equipped, has presumably begun. If this is true, then an unsuccessful attempt to break through the 38.2% Fibonacci level may lead to a resumption of the increase in quotes of the instrument.

April GDP and industrial production reports was released today in the UK. And these data turned out to be extremely weak, even worse than the pessimistic expectations of the markets. Industrial production declined by 20.3%, and GDP – by 20.4%. Thus, the demand for the pound declined again. However, a further decline in the quote of the instrument is unclear until there is a successful attempt to break the level of 1.2558. On the other hand, more important reports for today are not planned either in America or in the UK.

The pound/dollar pair supposedly continues to build the rising wave. Thus, purchases remain valid with targets located near the estimated levels of 1.2844 and 1.3030, which corresponds to 61.8% and 76.4% Fibonacci. I recommend continuing to buy the pound for each MACD signal “up”.