Average volatility over the past five days: 98p (high).

The EUR/USD currency pair passed the first two trading days of the week in a downward correction. We have repeatedly written that the growth of the euro and the pound in the past two weeks is not entirely clear. On the one hand, the reasons for the rise or fall of any currency or instrument can always be found. On the other hand, it can hardly really be considered that the rallies and protests in the United States caused such a serious fall in the US currency, especially since similar rallies are now taking place in European countries. Thus, we believe that the problem of the racist scandal is only 10% or 20% of the reasons for the fall of the US dollar. The remaining 80% or 90% lies elsewhere. But what else can they hide in, this is also a big question. All macroeconomic statistics continue to be ignored by traders. If not all, then 90% for sure. There were no new fundamental topics that could cause a serious change in the mood of traders. It turns out that there are a lot of important fundamental topics, but none of them could have such a strong influence on the pair in such a short period of time. Recall that the coronavirus epidemic, and the crisis, and the collapse of the economy, and the political crisis, and the topic of presidential elections, and the themes of the confrontation between China and the US – all these topics have been developing and growing for at least several months, and nothing extraordinary happened over the past ten days. Moreover, the US stock market has almost completely recovered after the March shock. Thus, it is impossible now to say that this or that event affected the dollar so negatively. Therefore, there is either a whole combination of factors, both technical and fundamental, or some kind of off-screen events and incidents that are inaccessible to ordinary traders. Based on this, we still recommend that traders pay increased attention to technical factors and trade strictly according to the trend.

Meanwhile, new polls and studies were conducted in the United States regarding political ratings for Donald Trump and Joe Biden. According to them, the ratings of the US president continue to decline and now make up no more than 38%. 57% of respondents do not approve of the actions of Trump, and this is his worst performance since impeachment. 55% of respondents support Biden, and this level of support is the highest for the former vice president of the country. It is reported that such a low rating was formed at Trump because of his reaction to rallies and protests related to the murder of an African American man in Minneapolis. 63% of respondents do not approve of Trump’s attitude to racial issues, and 65% believe that Trump’s reaction to the protests was more harmful than useful. It is also reported that this fall racial issues will be of great importance in the elections, where Trump is also significantly inferior to Biden. According to the same studies, Biden is ready to support 91% of black US citizens. Biden also bypasses Trump in the fight against coronavirus. Here, 55% of Americans believe that a democrat would do better with the epidemic. And only in matters of economics does Trump have shaky leadership. 51% believe that the president is doing well with the US economy. Trump himself commented on these studies in an inherent style: “The same numbers, and even worse, were against the deceitful Hillary (Hillary Clinton). Democrats would destroy America. ” However, in the near future, the US leader is going to resume holding rallies, despite the epidemic of coronavirus and protests that swept the whole country. The head of his campaign headquarters, Brad Parscale in the style of Trump himself, said: “The Americans are ready to return to activity, and President Trump is also ready. The return of the rallies will be exciting. You will again see the crowds and enthusiasm that sleepy Joe Biden can only dream of.”

The EU published its first quarter GDP indicator today. It turned out that GDP did not fall as much as traders expected, having lost only 3.1% in annual terms and 3.6% in quarterly terms. However, the euro didn’t really help. It would be strange if, after such strong growth, the pair would continue to rise in price due to the drop in European GDP, albeit not as strong as expected. 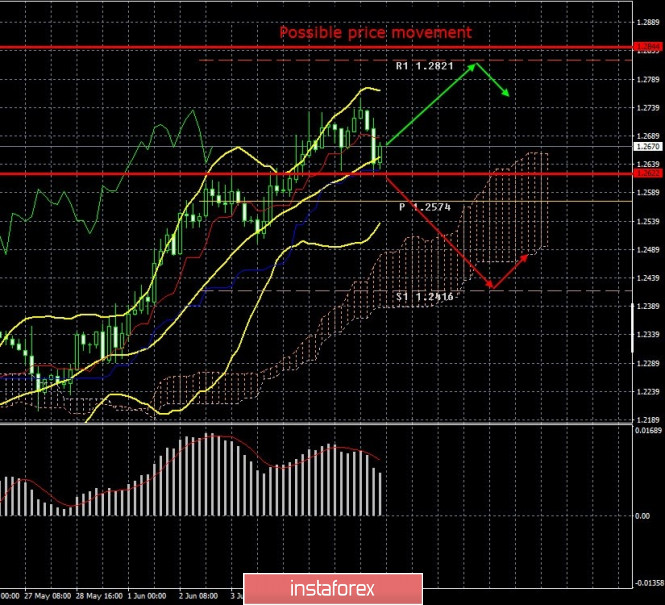 Average volatility over the past five days: 111p (high).

The GBP/USD currency pair also began to adjust on June 9, but only started today, and continued to move up on Monday. Thus, the pound now lives by its own rules, and they are even more amazing than those relating to the euro/dollar pair. The fact is that the British pound has even less fundamental reasons for growth than the euro. The reasons are the same – Brexit, so far the failed negotiations with Brussels, the complete economic uncertainty in the country. Thus, the reasons for strengthening the British currency can only be technical. For example, this could be the ongoing recovery of the pound after falling 1700 points on March 9–20. If you look at the daily timeframe, you can see that the pair has not yet returned to the March price levels. Thus, theoretically, traders can continue to trade for an increase in order to return to pre-crisis levels. The pair has now fallen to the critical Kijun-sen line on the 4-hour timeframe, so a rebound and a resumption of the upward trend is possible. At the same time, after such a firm growth, a stronger correction is necessary, therefore, we are waiting for the Kijun-sen line to be overcome and the pair’s quotes to fall further, at least to the bottom line of the Ichimoku cloud.

The EUR/USD pair started a downward correction on the 4-hour timeframe. Thus, the current targets are now levels 1,1396 and 1,1417, but it is recommended to open new longs only in case of a price rebound from the Kijun-sen line.

Orders for selling can be opened not before price taking below the critical line with the first objectives of 1.1200 and 1.1133. However, trading for a fall in this case is advised in small lots.

The pound/dollar has also adjusted to the critical line. Thus, it is also recommended to consider buy orders with targets at 1.2821 and 1.2844 in case of a rebound from this line, which will maintain the current upward trend.

It is recommended that sales of the GBP/USD pair be considered with a view to the support level of 1.2416 not earlier than consolidating quotes under the Kijun-sen line.

Source: EUR/USD and GBP/USD. Donald Trump loses 14% to Joe Biden and is going to hold campaign rallies, despite coronavirus and protests