The expected recovery in business activity in the eurozone services sector did not provide any significant support for the euro. This may signal that the bullish momentum has come to a halt ahead of tomorrow’s meeting of the European Central Bank.

The final composite Purchasing Managers’ Index of the eurozone was up on the surprising data indicating that the European economy hit by the coronavirus-related crisis has reached its low and may start to recover in the near future.

According to Markit, Italy’s Supply Managers’ Index in services sector jumped to the level of 28.9 in May, while back in April it was just at 10.8 points. Analysts expected the PMI to reach 26.5 points. In France, the situation is even better. After the quarantine restrictions have been partially lifted, the Services PMI surged to 31.1 points in May following a drop to 10.2 points in April. Germany has also shown good results. The PMI in the German services sector in May increased to 32.6 points compared to 16.2 points in April, whereas economists had predicted a rise to 31.4 points.

However, it’s worth noting that the rising indices in the euro area may point at a slowdown in the business activity reduction rather than at its recovery. Unless the index goes above the mark of 50, the economy will still remain in the recession.

The overall eurozone Services PMI rose to 30.5 in May compared to 12.0 in April. Experts predicted the PMI to reach 28.7 points. Markit also reported that the final composite eurozone PMI for May was revised upwards from the first estimates and amounted to 31.9 points versus 13.6 points in April.

The data on the unemployment rate in Europe did not support risk assets, although the indicators were much better than expected. Against this backdrop, the European Central Bank may revise and upgrade its economic outlook for the euro area at its meeting on Thursday.

Surprisingly, unemployment in Italy has even decreased in April because many employees did not look for a job during the lockdown. Italy’s unemployment rate fell to 6.3% in April from 8.4% in March, while economists had expected the unemployment to rise to 9.5%.

As traders continue to ignore the overall positive fundamental statistics, the euro is unlikely to show a rapid growth. In the morning review, I mentioned that the growth of risk assets can be capped in the short term, especially when German lawmakers still disagree about the final version of the stimulus plan which was recently proposed by the European Commission. It is better to be cautious when buying the euro ahead of the ECB meeting. Tomorrow, the European Central Bank will present economic outlook for the euro area which may be rather gloomy, although today’s report on the eurozone labor market may partially outweigh negative factors. All the focus will be on ECB President Christine Lagarde’s speech which may potentially interrupt the euro’s rally if the projection for the eurozone recovery turns out to be too pessimistic.

The euro moved notably higher last week after the European Commission had offered a stimulus package of 750 billion euros to support the European economies. Still, the rescue plan needs to be approved by all the members who failed to reach an agreement so far. In particular, the northern EU countries seem reluctant to support the plan.

The report on retail prices in the eurozone showed a considerable drop in April. The producer price index signals a significant downward pressure on inflation. However, the drop was mainly due to the collapse in energy market which is already showing some signs of recovery. The PPI fell by 2.0% in April this year compared to March, and fell by 4.5% compared to the same period in 2019. Economists had forecast a decline of -1.7% and -4.0% respectively. As for the eurozone producer price index, excluding energy, or the base index, it dropped by only 0.3% in April and by 0.3% on the yearly basis. 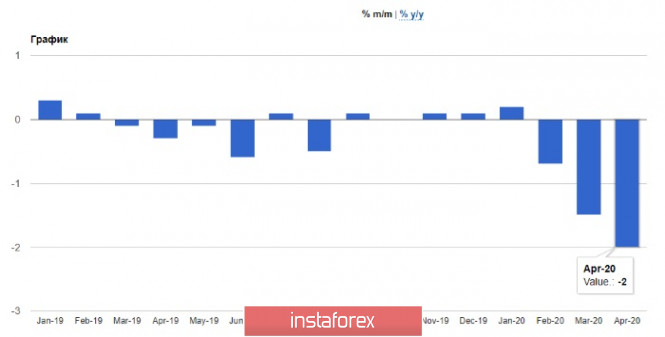 The technical picture for the EUR/USD pair remains almost unchanged from the morning forecast. A breakout of the resistance level at 1.1230 can fuel the demand for the euro and may send the pair to new highs at 1.1295 and 1.1350. If the euro stays under pressure after today’s reports on the US services sector, which has suffered the most from the coronavirus, traders can start taking profit ahead of the tomorrow’s ECB meeting. In this case, the first two strong levels of support will be seen at around 1.1140 and 1.1070.

The British pound has largely shrugged off positive reports on services sector, although usually this data triggers a strong bullish momentum. Analysts think that the chances for a quick recovery in the UK services sector and its return to pre-crisis levels are very slim this year. Today’s report showed that the restrictions introduced due to the coronavirus pandemic still have an effect on the services sector. And even if quarantine measures are lifted, the social distancing rules will continue to weigh on it.

According to Markit, the final Services PMI for the UK in May 2020 increased slightly and amounted to 29.0 points against the preliminary estimates of 27.8 and the final reading of 13.4 in April. As long as the indicator is below 50 points, business activity will continue to decline.

The technical picture for the GBP/USD pair remaines unchanged from the morning forecast. The breakthrough of the next resistance at 1.2610 will lead to an upward trend to the of highs 1.2650 and 1.2740. As for the downward correction, the key support levels can be found at around 1.2505 and 1.2430.

The Australian dollar stopped its rally after today’s data showed that the Australian economy contracted in the 1st quarter of this year due to the quarantine. According to a report by the Australian Bureau of Statistics, Australia’s GDP for the first quarter of this year fell by 0.3% compared to the previous quarter. It gained 1.4% compared to the same period last year. Most likely, in the 2nd quarter, the indicator will drop even lower as it will fully embrace the picture of the coronavirus aftermath. In his speech, the Australian Treasury Secretary said that the government estimates a potential decline of 20% in GDP in the 2nd quarter 2020. However, the Australian economy is giving some encouraging signals and showing unexpected resilience during the crisis.

Source: EUR/USD and GBP/USD likely to plunge as bullish trend comes to a halt. Surprising eurozone unemployment rate to be reflected