A positional struggle continues in the euro-dollar pair: buyers are trying to continue the upward trend, while sellers are resisting, pulling the price to the 12th figure. As a result, the pair, although it demonstrates increased volatility, but actually stands still, within the 13th price level. Both bears and bulls need a powerful informational occasion that would help to continue moving in one direction or another.

Meanwhile, the fundamental picture for the pair is controversial, although yesterday’s Federal Reserve meeting did not end in favor of the US currency. However, the market quickly played out the dovish rhetoric of the US central bank, switching to other fundamental factors. Firstly, many theses voiced yesterday were already voiced earlier – for example, regarding the fate of the interest rate, which they do not plan to raise until the end of 2022. Secondly, the regulator did not annoy the market by discussing a negative rate or the intention to introduce control over bond yields. That is, the central bank bypassed the most acute and painful topics for the dollar, thereby smoothing out the overall impression of the June meeting. As for the updated forecasts, there is nothing new for traders here. The market has long been aware that this year will be significantly worse for the US economy than the previous one, and the results of the second quarter will be record bad. Therefore, the fact of taking such prospects was not surprising, and even less shocking market participants.

Thus, the initial reaction of the market was of a reflex nature: traders reacted to unconditionally dovish factors that could not help weakening the dollar. Let me remind you that the Fed promised to increase purchases of treasury and mortgage-backed securities “at least at the current pace” in order to maintain the level of lending to households and enterprises. In particular, this week it is planned to buy back $20 billion in Treasuries and $22.5 billion in mortgage-backed securities. Also, the central bank did not rule out the possibility of conducting repos in large volumes, “if the economic situation so requires.”

Fed commitment to stimulus policy is an unpleasant fact for the dollar. But then again – the market most likely allowed the dovish scenario of the June meeting, so the EUR/USD bulls could not gain a foothold in the area of the 14th figure, although at the end of yesterday they confidently entered.

Today, other fundamental factors have come to the fore. Firstly, traders focused on Powell’s phrase that the bottom of the crisis has already been passed, and that in the second half of the year the economy will actively recover. At the same time, Powell did not rule out that the authorities will continue to provide incentives for businesses to overcome the crisis.

The idea of additional incentives was developed by US Treasury Secretary Stephen Mnuchin. Speaking in the Senate, he said that he would seriously consider the issue of additional direct payments to people “under the bill on the next phase of anti-crisis assistance in connection with coronavirus.” According to him, assistance should also be given to industries that are trying to resume work, including the hotel business and tourism. Later, in an interview with one of the television channels, he announced that he was ready to personally go to Congress for additional funds to protect jobs and employees. In addition, the head of the US Treasury noted that the United States would not be able to afford to close the economy again because of the coronavirus.

In other words, the market received two important messages today: firstly, the White House is ready to lobby for a new round of federal assistance, and secondly, the White House is against the introduction of a new lockdown. Actually, there are no reasons for its introduction: contrary to fears, protests in the US did not provoke a surge in COVID-19 diseases. As US Vice President Mike Pence said today, over the two weeks of protests, the increase in the number of diseases “is not observed.”

All of the above factors supported the greenback. However, dollar bulls could not organize the rally – including paired with the euro. Apparently, the market doubts that Democrats and Republicans will be able to find a common denominator about additional incentives. Let me remind you that in May the Democratic Party already tried to lobby the three-trillion package of additional assistance. The bill was passed in the House of Representatives (where they control the majority), but got stuck in the Upper House of Congress. The fact is that the initiative of the Democrats was harshly criticized by the Republicans, who in turn control the Senate. Also, the proposed document was criticized in the White House (and Trump, I recall, has the right to veto). According to representatives of the Republican Party, the Democrats use this legislative initiative as “public relations at the budget expense”, in anticipation of the presidential election, which should be held within six months. It is likely that the Democrats will also not allow Republicans to publicize on this issue – they have the power to block the consideration of the bill in the House of Representatives. 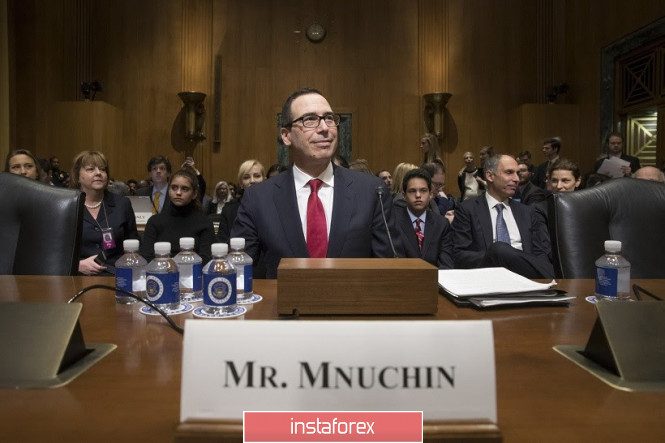 Hypothetically, the stalemate situation is reflected both in the positions of the dollar and in the dynamics of the EUR/USD pair. As a rule, the “motivational” statements of politicians and senior officials have a short-term impact on the market, unless they are then supported by concrete actions. Therefore, if the Republicans do not introduce a bill in the near future, the Mnuchin factor will lose its influence. And traders of the euro-dollar pair, in turn, will shift the focus of their attention to the summit of the EU countries, which is due to take place on June 19 (online). The agenda of this summit includes a long-term financial plan (i.e., the EU budget for 2021-2027) and the Eurozone Economic Recovery Fund, in the context of the recently presented anti-crisis fee of the European Commission. If the White House does not support Mnuchin’s words with actions, EUR/USD traders will completely switch to the news flow associated with the above meeting of EU leaders.

From a technical point of view, the pair on the daily chart is still between the middle and upper lines of the Bollinger Bands indicator, as well as above all the lines of the Ichimoku indicator, which still shows the bullish Parade of Lines signal. All this suggests that the pair retains the potential for its further growth – at least to the first resistance level of 1.1450 (the upper line of the Bollinger Bands indicator is on D1). If the Trump administration follows additional messages regarding additional incentives, the pair could develop a corrective pullback to the support level of 1.1260 (Tenkan-sen line on D1).