To open long positions on EURUSD, you need:

In the first half of the day, I paid attention to buying from the support level of 1.1325, and also recommended opening short positions after updating the maximum of 1.1403. If you look at the 5-minute chart, in the first half of the day, the bulls got a great chance to recover from the level of 1.1325 and actively returned to the market at the first test of this area. However, it was not possible to break above the resistance of 1.1403, from which the euro sellers returned to the market again. As for the current technical picture, nothing has changed. Bulls still need to break above the resistance of 1.1403, fixing on which will strengthen the upward momentum and lead to an update of the highs of 1.1462 and 1.1514, where I recommend fixing the profits. An equally important task for euro buyers is to protect the support of 1.1325, which they managed in the first half of the day. Only the formation of a false breakout at this level will be a signal to open long positions. Otherwise, given the fact that the bull market is gradually coming to an end, it is best to expect purchases to rebound from a large low of 1.1244 in anticipation of correction of 30-40 points at the end of the day.

To open short positions on EURUSD, you need:

As for short positions in the euro, the bears did a great job in the first half of the day, keeping the pair above 1.1403. In the North American session, sellers need to break through to the level of 1.1325, which will be possible only after good fundamental statistics on the American economy. Only fixing below the support of 1.1325 will increase the pressure on EUR/USD and lead to a return to the lower border of the 1.1244 side channel, where I recommend fixing the profits. The entire upward trend formed on May 25 will depend on the breakdown of this level. If the demand for the euro returns, and this will happen only if the resistance of 1.1403 breaks, it is best to count on short positions after updating the highs of 1.1462 and 1.1514 with the aim of a downward correction of 30-40 points within the day. 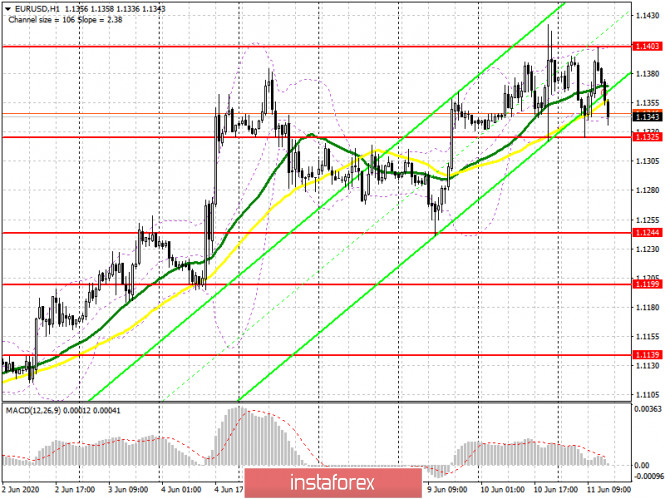 Trading is conducted in the area of 30 and 50 daily moving averages, which indicates an active confrontation between buyers and sellers.

Source: EUR/USD: plan for the American session on June 11