To open long positions on EUR/USD, you need:

Yesterday, I repeatedly paid attention to sales from the level of 1.1403, which the pair approached several times throughout the day. And if questions arise with opening short positions from this level at the European session, then this could not be in the afternoon. If you look at the 5-minute chart, you will see how another unsuccessful attempt to break above resistance 1.1403 led to increased pressure on the European currency and its fall to the day’s low in the area of 1.1325. Breakout and consolidation below this level by the middle of the US session was an additional signal for selling the euro, which continues to itself out at the moment. I also indicated such a signal in yesterday’s review. As for the prospects for further movement, the correction will most likely continue, since in the first half of the day, we should not expect the release of important fundamental data on the European economy, which can affect the pair. Bulls need to regain resistance 1.1325, because this is where it depends on whether the pair continues to move up or the bears will completely take the market under their control. In case of consolidation above 1.1325, the target will be resistance 1.1403, where I recommend taking profits. In case the euro falls further, an equally important task for buyers will be to protect support 1.1244, where forming a false breakout will be the first signal to buy the euro. In another scenario, it is best to open long positions on a rebound from a low of 1.1199, counting on a correction of 30-40 points by the end of the day. A new COT report will be released today, in which the alignment of forces can seriously change. Let me remind you that the Commitment of Traders (COT) reports for June 2 recorded a decrease in both long and short positions, but sellers left the market more, which was expected to maintain a bullish momentum in the pair earlier this week. Reduction of short non-profit positions occurred from the level of 99,812, to the level of 93,172, while long non-profit positions slightly decreased, from the level of 175,034 to the level of 174,412. As a result, the positive non-profit net position increased again and reached 81,240, against 75,222.

To open short positions on EUR/USD, you need:

As for the short positions in the euro, the bears continue to do everything to build a good downward correction in the pair. After they took away support 1.1325 at the US session yesterday, which now acts as resistance, all that needs to be done in the morning is to not let the bulls go above this level, forming a false breakout there, which will indicate opening new short positions in order to update the low of 1.1244. A more distant level for euro sellers at the end of this week will be the low of 1.1199, where I recommend taking profits. Good data on the US economy could enable them to make an update at the beginning of the US session. If the demand for the euro remains at the level of 1.1325, and there is no rapid movement down, it is best to postpone short positions until the moving averages are updated, which act as resistance, or sell EUR/USD immediately for a rebound from the high of 1.1403 per 30 correction -40 points within the day, 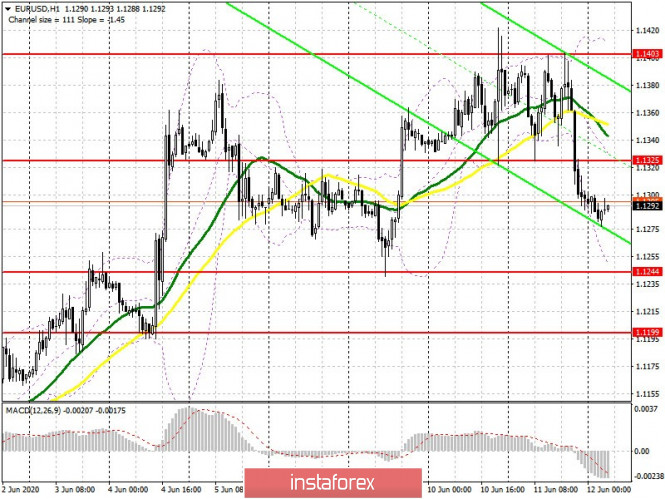 Trade is conducted below 30 and 50 moving average, which indicates a further decline in the euro.

Source: EUR/USD: plan for the European session on June 12 (analysis of yesterday's deals). Euro continues to adjust, US dollar returns