The rise of the euro, which started after the news of an expanded emergency assistance program worth € 1.35 trillion, is now gradually slowing down. The data released yesterday on industrial production in Germany was hardly encouraging to traders, as the figures for which gives question to a bright future and quick economic recovery after the coronavirus pandemic.

Improvements are expected to occur in May this year since quarantine restrictions are now mostly lifted. However, a quick return to pre-crisis levels should not be counted on, as even experts believe that full recovery will take at least several years. In addition, there are still a number of reservations for such an optimal scenario, as it will only be possible if there is no second wave of the virus, as well as a resumption of quarantine restrictions.

Many companies in the German manufacturing sector also expect further reductions in economic activity. In at least two to three months, pressure is to remain quite high, and until it is reduced, reaching above the level of 50 points is unlikely to happen. A survey conducted by the Ifo Institute also reveals that expectations recovered slightly, from -51.0 points in April to -20.4 points in May.

As for production, a report released yesterday showed a huge decrease in the index since January 1991, revealing a 17.9% drop in the indicator in April this year, much lower than the forecasted 16.8%. Compared to the same period last year, the index declined by 25.3%. Manufacturing output also collapsed by 22.1%, with the automotive industry suffering the most, dropping production by 74.6%. 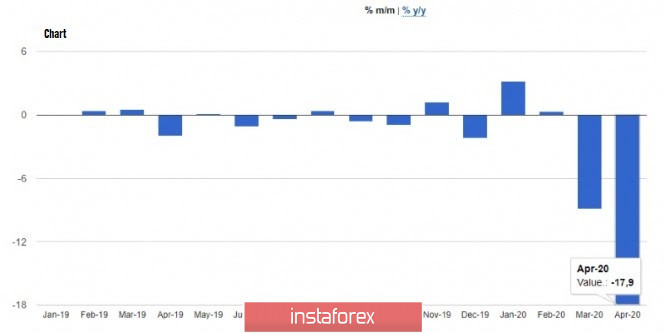 Such data reduced the optimism of market participants, which could lead to a downward correction in the EURUSD pair. However, some experts believe that an increase in bond purchases under the PEPP pandemic emergency response program will return demand for risky assets, but it’s too early to count on it yet. In addition, discussions on the € 750 billion program recently proposed by the European Commission will resume soon, and it will be a good response to a deep recession and deflation in the eurozone economy.

Meanwhile, a series of important changes were adopted by the Fed with regards to lending and business support programs in the United States. The Fed decided to soften the lending conditions yesterday, lowering the minimum amount of loans from $ 500,000 to $ 250,000. Loan size and loan repayment terms were also increased, which will surely help on the recovery of businesses after the coronavirus pandemic.

With regards to budget deficits, the US budget administration published a report yesterday which revealed that the federal budget deficit in fiscal 2020 is now almost $ 2 trillion. Revenues of the US government decreased by 25% in May this year, while expenses increased by 53%. However, no one really gives much attention to this, since the priority right now is to deal with the economic effects of the coronavirus pandemic.

As for macroeconomic statistics, the reports published yesterday on the state of the US economy did not greatly affect the market. According to the data released by the Conference Board, the employment trend index in May 2020 recovered slightly and amounted to 46.28 points, against its 42.53 value in April. Compared to the same period last year, the index decreased by 57.9%. Such figures were not surprising since the report of the US Department of Labor last Friday already showed an increase in jobs by 2.5 million in April, and the number of people returning to work already exceeded the number of new layoffs in the country. In addition, the optimism of Americans regarding the US economy is also growing, as evidenced by the report of the Federal Reserve Bank of New York.

The World Bank also published its latest forecasts on the global economy for this year, which expects a contraction of about 5.2% in 2020, and a growth of about 4.2% in 2021. Meanwhile, the US economy is forecast to shrink by 6.1% in 2020, and China’s economy to grow by 1%. In the eurozone, in spite of all the financial assistance provided by the ECB, the economy is still projected to decline by 9.1% in 2020.

As for the technical picture of the EUR/USD pair, the demand for risky assets is soon to decline, which may lead to a downward correction in the trading instrument. A breakout from the support level 1.1265 will increase the pressure on the pair, which will lead to a huge downward movement to the support levels 1.1200 and 1.1130. Thus, to maintain a bullish mood, the bulls need to return and consolidate the quotes at 1.1325, which will be extremely difficult, since a no less gloomy report on the eurozone GDP for the first quarter of this year is expected to be published today. Only a breakout from 1.1325 will push the quotes up to the area of weekly highs at 1.1375, an update of which will lead to a movement to the resistance levels 1.1460 and 1.1520.