It is vital to take a break following the EUR/USD pair’s impressive rally last week. A downward correction seems to have begun on Friday. However, the critical Kijun-sen line has not been reached at the moment, not to mention the moving average line on the linear regression channels trading system. Thus, so far the scale of the correction does not even allow us to conclude that the correction will continue for at least a few days and will not take the form of a banal microscopic pullback. As we already discussed in previous articles, the fundamental and macroeconomic backgrounds are now rather ambiguous. More precisely, traders’ reaction are ambiguous to them and it differs depending on the pair or instrument. Thus, we cannot draw an unambiguous conclusion that the cause for the US dollar’s fall are the rallies, riots and protests in the United States, because the franc, for example, is not particularly expensive in tandem with the dollar, and the Japanese yen is getting cheaper at all. We can’t also say that the US dollar is depreciating due to problems with the American economy (the stock market has recovered after the March collapses), as the European economy is not in the best condition (as confirmed by the last ECB meeting and the speech of Christine Lagarde). Thus, everything could be attributed to technical factors, but in regards to technique, the upward movement turned out to be too strong and recoilless. Thus, we believe that the euro has risen in price over the past week based on a whole set of factors, traders’ expectations, and their concerns. Therefore, it is completely impossible to predict when traders will stop paying attention to one or another factor, and the euro will stop growing. Based on this, we believe (as before) that market participants should definitely follow the trend and in no case try to guess the pair’s reversal down, guided by the opinion “the euro has already risen in price so much, it will fall further.”

The new trading week will begin immediately with several rather interesting reports, although there will be relatively few statistics at its beginning. Germany is set to publish a report on industrial production for April on Monday. If, according to the results of March, the reduction of the indicator amounted to 9.2% in monthly terms, then by the end of April, -15.5% is expected. Thus, the European currency is unlikely to receive support on the first trading day of the week.

One of the important events on Tuesday that we take note of is the eurozone GDP for the first quarter, which is still in an inconclusive version. The forecast is the same at -3.2% in annual terms and -3.8% in quarterly terms. There will be no important macroeconomic statistics in the eurozone on Wednesday, but a Eurogroup meeting is planned on Thursday – finance ministers of the EU member states, the head of the ECB and other first EU financiers. This event can be extremely interesting, since within its framework, a plan to save the EU economy will almost certainly be discussed. Recall that Germany and France’s last proposal for 500 billion euros was joyfully approved by the southern countries and rejected by the northern ones. In principle, almost all plans to one degree or another imply that the most financially stable EU members must pay for saving the most affected countries from the epidemic and crisis. This is precisely what does not suit the “most financially stable participants” of the EU. Germany, Austria, the Netherlands, the Scandinavian countries, which are famous for their economy and financial discipline, are not eager to transfer several tens of billions of euros to the “spender” accounts of Spain, Italy, Greece and Portugal. Therefore, they offer only lending to the southerners and what is necessary with the introduction of certain budget restrictions for future years. Naturally, this option is not liked by the southerners themselves, who simply count on getting billions of euros and do not owe anything to anyone. In general, the Eurogroup meeting will discuss issues on this topic.

A report on industrial production in the eurozone is set for the last trading day of the week. Forecasts show that in monthly terms in April the reduction will be 20.6%, and in annual terms – 31.2%. Thus, based on the macroeconomic statistics of the next week, the euro is unlikely to receive support. However, this is the main paradox of the current time – it is unlikely for the United States to provide stronger statistics, which means news from overseas offset the effect of news from Europe. The most interesting event will be the Eurogroup meeting.

At the beginning of the article, we already mentioned that the economic situation in the eurozone is no better than the US one. Last week, the ECB decided to expand the PEPP program by 600 billion euros, that is, almost twice. On the one hand, this money will go to help the economy, which will be able to recover faster (this is good). On the other hand, this means that the scale of the fall of the EU economy is much larger than originally estimated (this is bad). Thus, we do not believe that the ECB’s actions could lead to an increase in the euro. The ECB recently issued a report on the financial stability of the EU countries, taking into account the latest changes due to the coronavirus crisis. ECB financiers warn that the consequences of the crisis are now exceeding all expectations and exceed the permissible risks of financial stability. It is expected that in 2020 the profitability of eurozone banks will decrease from 5.4% to 2.4%. Banks will experience problems with liquidity and loans, which will negatively affect their credit ratings. A significant increase in “dead” loans is possible. In addition, the ECB predicts an increase in the sovereign debt of all EU countries in aggregate from 86% of GDP to 102.7%. The budget deficits of the EU countries will grow by 8%. “The pandemic has led to one of the sharpest declines in the economy in recent times. However, the measures of the authorities and regulators avoided a financial collapse. Nevertheless, the consequences of the pandemic on the prospects for bank profitability and the financial situation in the medium term must be accurately assessed so that our financial system can continue to support economic recovery,” said ECB Vice President Luis de Guindos.

What is the result? We believe that it is high time for the euro/dollar pair to begin adjusting. However, before the critical line is crossed, any downward movement will have the correction status. It will be possible to start thinking about a downward trend no earlier than overcoming the Kijun-sen line. 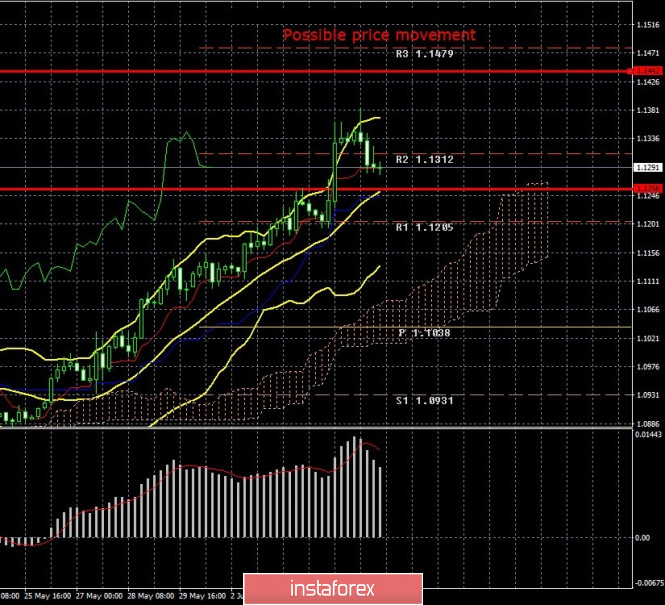 Trading recommendations for the EUR/USD pair:

The technical picture of the EUR/USD pair shows that the price has started a downward movement to the Kijun-sen line. A price rebound from this line will provoke a resumption of the upward movement. All support and resistance levels will be rebuilt on Monday, thus, new trading goals will be obtained. From our point of view, the fundamental and macroeconomic backgrounds next week will not have a significant impact on the movement of the pair. But do not forget that you can always expect “news bombs” while Donald Trump remains the president of the United States.