The US dollar continues to lose ground in almost all pairs, including paired with the European currency. A pair of EUR/USD updated its multi-month high again today, reaching 1.1390. The last time the price was at such peaks was in early March, that is, even before the start of the coronavirus crisis. It is noteworthy that the price increase was preceded by a price decline to the level of 1.1241. The downward pullback was due to the temporary strengthening of the dollar. The euro moves exclusively in the wake of the American currency. Although the euro received support from representatives of the ECB today, who stated that they would show a flexible approach to asset purchases in various market segments. We are talking about the PEPP program, which was expanded to 600 billion last week.

But, of course, the dollar is the main impulse for the growth of the EUR/USD pair. At the start of the American session, dollar bulls failed the first test: data on inflation in the US turned out to be worse than forecasts. All components of the release came out in the red zone, not predicting anything good for dollar bulls in the context of the June meeting of the Fed, the results of which will be announced tonight.

Generally, today’s numbers expectedly reflected the May decline in consumer activity. Quarantine in the United States began to gradually weaken only in the second half of last month, so inflation dynamics a priori could not be positive. Nevertheless, the May result turned out to be worse than the already pessimistic forecasts. In particular, the general consumer price index in monthly terms, with a growth forecast of up to 0.2%, was in the negative area again, dropping to -0.1%. Experts expected to see the general CPI at around 0.2% in annual terms, while the figure came out at around 0.1%. Core inflation, excluding food and energy prices, was also disappointing. In monthly terms, the core index dropped to -0.1% and – to 1.2% in annual terms.

It is worth recalling that other inflation indicators were also far from satisfactory. One of the most important indicators for the US regulator – the PCE Price Index, increased by only 0.5% in annual terms last April, while the core index (excluding food and energy prices) increased by only one percent. Consumer inflation (CPI) collapsed to 0.3% y / y from the previous level of 1.5%. PPI inflation also slowed more than predicted: according to the latest data (May figures will be published only on Thursday), the producer price index slowed in April to -1.3% mom, while experts expected it to be -0.5%. Excluding food and energy, the situation is no better: -0.3% (with a forecast decline to -0.1%). On an annualized basis, a similar dynamic was recorded: The indicators came out in the “red zone” in both monthly and annual terms, significantly not reaching forecast values. Salaries were also disappointing. According to the latest Nonfarms, the indicator of average hourly wages on a monthly basis collapsed into the negative area in May, and immediately to -1%. The indicator of real average hourly earnings also “pumped up” – it increased by 6.5% (y/y) with a forecast growth of up to 7.6%. Weak growth rates in the level of wages negatively affected the growth rate of inflation. 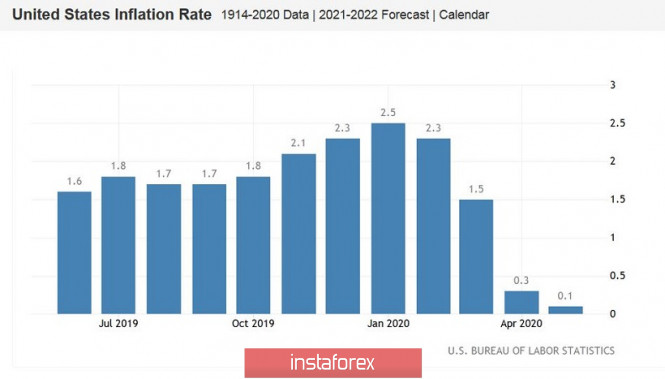 The arguments listed above indicate that strong Nonfarms will not save the dollar: the Federal Reserve will most likely maintain the “dovish” mood today. However, it is difficult to say how exactly it will be expressed. According to some analysts, Powell will confine himself to general phrases about the readiness to use “all available tools” (without any specifics). According to other experts, the US regulator will follow the footsteps of its colleagues from the Bank of Japan and the Reserve Bank of Australia, which control the yield curve of the Treasuries. Today, the head of the Fed may announce the implementation of this scenario. The Federal Reserve may also voice a forecast that it will raise rates no earlier than the year 2022. Some expect from the Central Bank and more “dovish” attitude: a forecast on an increase in the rate “not earlier than in 2023” + limitation on the yield of treasury bonds.

So, the dollar is now trading amid weak US inflation and awaiting the Fed’s verdict. In general, the dollar only responds to numerous rumors, following the saying “fears have large eyes.” This means that when you are scared of something, your mind will make it bigger and scarier than it really is. However, if the Fed is implementing the most “dovish” scenario out of all the scenes discussed tonight, the EUR/USD pair will not only enter the 14th figure, but will also test the resistance level of 1.1440, which corresponds to the upper line of the Bollinger Bands indicator on the daily chart. Otherwise, the indicated pair will be followed by a correctional pullback to the support level of 1.1240 (Tenkan-sen line on the daily chart).