Yesterday’s main event was the European Central Bank meeting at which it announced the expansion of the QE program – the volume of repurchased assets on the regulator’s balance sheet was increased by 600 billion euros, that is, in total from the first program to 1.35 trillion euros. Asset purchases will continue for exactly one year. The euro rose by 104 points, although it would have been more understandable to pull it down on the monetary factor itself. The ongoing growth, of course, involves the psychological nature of investors who are waiting every day for any news on the recovery of the economy.

So, the euro has fulfilled the previously identified target of 1.1342. The euro has grown by 250 points since the beginning of the week and now investors can close speculative purchases, especially at the end of the week. The best reason for this could be today’s data on employment in the United States. Data for May regarding new jobs in the non-agricultural sector are expected at -7.75 million, the general unemployment rate is projected to increase from 14.7% to 19.4%. Previous employment indicators tell us that today’s data will be better than forecasts.

Our main scenario assumes a reversal of the euro with a subsequent decrease to 1.1130 – to the embedded line of the price channel of the monthly timeframe, similar to the one that occurred on March 10. 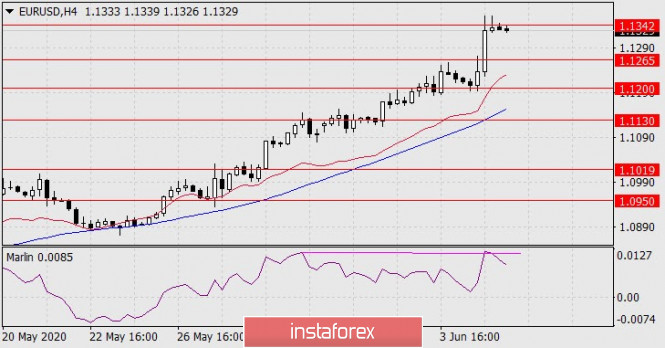 An alternative option involves continued growth in risk appetites. In this case, the target opens at 1.1415 after overcoming yesterday’s high, then it can be followed by taking 1.1495, which is the March 9 high.