To open long positions on GBPUSD, you need:

The break in the resistance of 1.2508, which I drew attention to in my morning forecast, led to the continuation of the upward trend in the British pound, even despite the high risk of failure of the next round of trade negotiations between the EU and the UK. If you look at the 5-minute chart, you will see how the entry point, after the breakout of the resistance of 1.2508, was exactly the return of the price to this level from the opposite side, which was a signal to open long positions in the expectation of continuing to strengthen the British pound, which happened. So far, the bulls have retreated from the level of 1.2557, and their main task for the second half of the day is to return this range, which can lead to a new powerful bullish impulse, capable of updating the highs of 1.2597 and 1.2638, where I recommend fixing the profits. If buyers fail to get above 1.2557, and the outcome of negotiations will not produce the desired result, it is best to postpone long positions to update major lows around 1.2439 and 1.2376, where you can buy the pound from the rebound in the calculation of correction of 30-40 points intraday.

Sellers are not letting the pair go above the resistance of 1.2557 yet, and are trying to form a strong resistance there. Another false breakout formation at this level in the second half of the day will signal the opening of short positions, and the failure in the UK’s negotiations with the EU will serve as a good bearish impulse that can return the GBP/USD to the support area of 1.2508. Fixing below this level in the American session will lead to the demolition of stop orders of bulls and update the lows of 1.2439 and 1.2376, where I recommend fixing the profits. If the demand for the pound continues and the bulls regain the resistance of 1.2557, it is best not to rush to sell but to see how the pair will behave after updating the maximum of 1.2597. Or sell immediately on a rebound from the area of 1.2638 in the expectation of correction of 30-40 points at the end of the day. 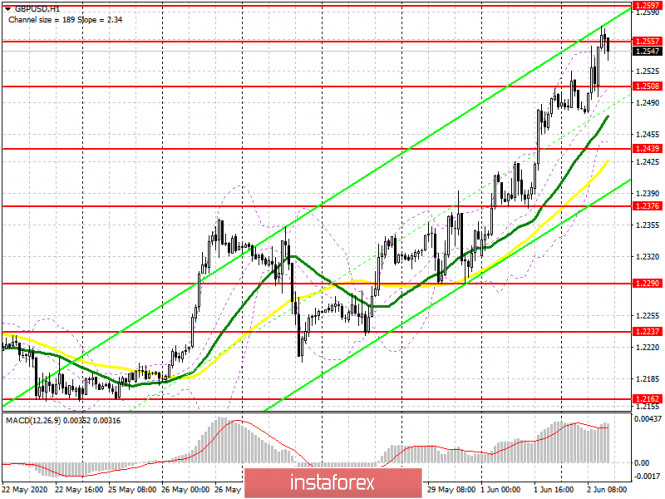 Trading is conducted above the 30 and 50 daily averages, which indicates a high probability of continuing the bullish trend.

Source: GBP/USD: plan for the American session on June 2 (analysis of morning deals). The pound continues to update monthly highs.