Following yesterday’s decision by the Federal Reserve on interest rates, as well as US inflation data, the bulls tried to continue their upward trend by forming a good signal to buy the pound, which, unfortunately, did not translate into a new bullish trend. If you look at the 5-minute chart and remember my forecast for yesterday afternoon, you will see how buyers were able to break through above resistance 1.2773 in the afternoon, the second test of which from top to bottom became an entry point to long positions. However, more than 30 points of upward movement did not take place. At the moment, an important task of the bulls is to protect support 1.2706, a breakthrough of which can cause them many problems. Forming a false breakout at this level will be a signal to open long positions in the pair that can lead to updating this week’s high at 1.2803. An equally important task will be to consolidate above this range, which will open new highs for GBP/USD in the areas of 1.2906 and 1.2961, where I recommend taking profits. If the pressure on the pound returns, and most likely it will be so, then after breaking through the support of 1.2706, it is best to postpone long positions until the test of this week’s low in the region of 1.2620, based on a correction of 20-30 points, or buy GBP/USD at a rebound from larger support around 1.2534. It is worth recalling that you need to be very careful with purchases at current highs, as the recent Commitment of Traders (COT) report for June 2 clearly showed a change in market sentiment. Over the week, short non-profit positions increased from 61,449 to 63,014, while long non-profit positions sharply dropped from 39,192 to 26,970. As a result, the nonprofit net position became even more negative and turned out to be the level of -36,044, against -22 257, which indicates a slowdown in the short-term bullish momentum and a large downward correction to likely form.

To open short positions on GBP/USD, you need:

Sellers coped with the task yesterday and did not allow the bulls to form another wave of pound growth. Now the primary task of the bears is to gain a foothold below the support of 1.2706 as soon as possible, which forms a new signal to open short positions in the hope of continuing to pull down the pair to the area of a high of 1.2620. Another target for sellers is support at 1.2534, where I recommend taking profits at the end of this week. In case GBP/USD grows in the morning, the bears also need to defend resistance at 1.2803, where forming a false breakout will be a signal to open short positions. When breaking through resistance 1.2803, it is best to abandon short positions to test the high of 1.2906, or sell GBP/USD immediately for a rebound from a larger resistance of 1.2961 based on a downward movement of 30-40 points by the end of the day. 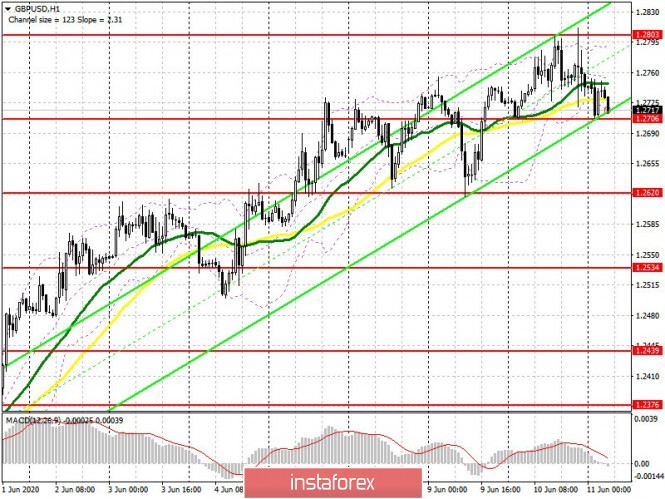 Trade is carried out in the region of 30 and 50 moving average, a breakthrough of which can lead to forming a bearish market.

Source: GBP/USD: plan for the European session on June 11 (analysis of yesterday's deals). Pressure on the pound gradually returning.