The British pound continued to grow against the US dollar yesterday, while traders wait for good news on the conclusion of a trade transaction between the UK and the EU. The next round of negotiations will begin today. If you look at the 5-minute chart, you will see how yesterday, the buyers did an excellent job with the second test and consolidated above the resistance of 1.2414, from which it was possible and necessary to sell yesterday morning. A break of this range in the afternoon led to a powerful bullish momentum and updating resistance 1.2508, near which the main trade is now conducted. However, if we look at the Commitment of Traders (COT) reports for May 26, we will see that a very large increase in short positions was recorded, while long non-profit positions showed a slight increase, which indicates a gradual return of interest of British pound sellers to the market at current highs. The preponderance remained on the side of the sellers even despite the pair’s large growth since mid-May of this year. The COT report indicated that short non-profit positions increased from 54,799 to 61,449 during the week, while long non-profit positions also increased from 35,810 to 39,192. As a result, the non-profit net position became even more negative and turned out to be at the level of –22,257, against –18,989, which so far indicates that the medium-term bearish trend has remained in GBP/USD. As for the intraday strategy, the bulls need to defend support 1.2439, a return to which can happen very quickly today in the morning. Moving averages are also visible at the same level, from which the pair can rebound. Forming a false breakout in this range will be a signal to open long positions in order to grow to resistance 1.2508. An important task for the bulls to maintain an upward momentum will be to break and consolidate above this range, with the test already upside down on the volume, which will lead to forming a new buy signal based on updating the highs of 1.2557 and 1.2597, where I recommend taking profits. If the pressure on the pound persists, and there is no major movement upward from the 1.2439 level, it is best to pause with long positions and buy for a rebound from the lows of 1.2376 and 1.2290, counting on a correction of 35-40 points inside the day.

Pound sellers urgently need to return the market to their control, and this can only be done after consolidating under the support of 1.2439, where the moving averages are held. This will then increase the pressure on the pair and lead to a test of larger support at 1.2376, where I recommend taking profits. However, it will only be possible to talk about resuming the downward trend after breaking through the low of 1.2290. A very important task for sellers is to prevent the breakout of resistance 1.2508, forming a false breakout there in the first half of the day will then be a signal to open short positions in the pound. A lot will depend on negotiations between the UK and the EU. If at least minimal progress is achieved, then it is best to return to short positions after updating the high of 1.2557, or from larger areas 1.2597 and 1.2638, counting on a correction of 30-40 points within the day. 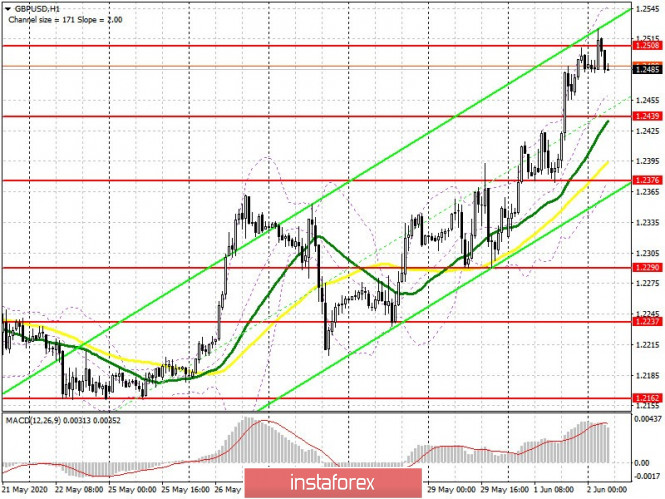 Trade is conducted above 30 and 50 moving averages, which indicates a possible continuation of the bull market in the short term.

Source: GBP/USD: plan for the European session on June 2. COT reports (analysis of yesterday's deals). Pound strengthens ahead of