Home » Forex Technical Analysis » GBP/USD: plan for the European session on June 4 (analysis of yesterday's deals). Pressure on the pound is gradually increasing.

After yesterday’s unsuccessful attempt to once again break through above resistance 1.2609 during the US session, the pressure on the pound gradually increased, which I repeatedly paid attention to in my reviews. If you look at the 5-minute chart, you will see how another unsuccessful attempt to grow above 1.2609 led to selling the pound and consolidation below the rather important resistance of 1.2555, under which the main trade is now being conducted. Bulls urgently need to return to this level in the morning, since we can count on the pair’s growth in the short term in this particular scenario. It is important to note that GBPUSD fell below the moving averages, which does not add optimism to market participants. Consolidation at 1.2555 will be a good signal to buy with the aim of re-growth to resistance 1.2609 and its breakout, which will lead the pound to new highs in the areas of 1.2647 and 1.2686, where I recommend taking profits. If the pressure on GBP/USD persists in the first half of the day, then it is best to postpone purchases until the support test of 1.2496, subject to forming a false breakout there, or open long positions immediately to rebound from a low of 1.2439 based on a correction of 30-35 points within the day. It must be remembered that in COT reports over the past week, the situation also remains on the side of the pound sellers, so you should be extremely careful with future purchases at highs. The COT report indicated that short non-profit positions increased from 54,799 to 61,449 during the week, while long non-profit positions also increased from 35,810 to 39,192. As a result, the non-profit net position became even larger negative and turned out to be at the level of –22,257, against –18,989, which so far indicates that the medium-term bearish trend has remained in GBP/USD.

To open short positions on GBP/USD, you need:

Sellers are cautious enough, as the pound’s recent growth was more related to the dollar’s weakness due to unrest, than to the strength of the pound itself. Bears need to form a false breakout in the resistance area of 1.2555 and a rebound from the moving average, which will be an ideal signal to open short positions in the pair. However, pressure on the pound will also remain while trading is below the 1.2555 level, which may lead to a fall in the area of first support at 1.2496, but a bearish target will be the low at 1.2439, where I recommend taking profit. Testing this level can be a turning point in the current upward trend of May 25 this year. If the bulls manage to take the market under their control, then it is best to consider short positions only after a false breakout in the resistance area of 1.2609, or slightly higher: from the highs of 1.2647 and 1.2686. However, a test of these levels will lead no more than to a downward correction of 25-30 points within the day. 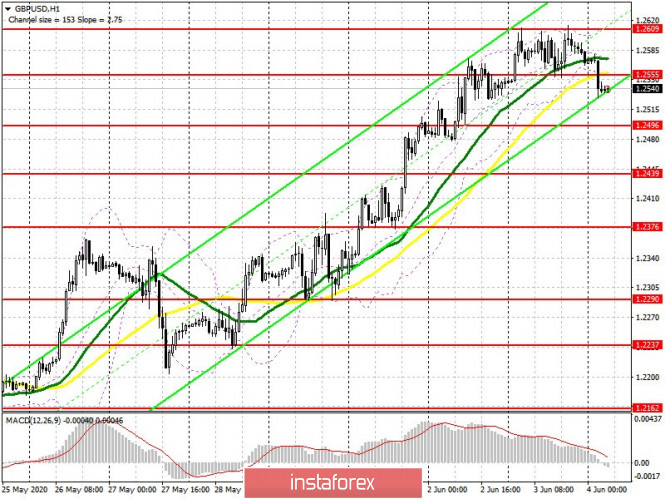 Trade is conducted below 30 and 50 moving averages, which indicates the formation of a bear market in the short term.

If the pound rises, the upper border of the indicator in the region of 1.2609 will act as resistance.

Source: GBP/USD: plan for the European session on June 4 (analysis of yesterday's deals). Pressure on the pound is gradually increasing.