The British pound also quietly rose in price against the dollar over the past week, and this event is even more surprising than the growth of the European currency. In previous articles, we have already mentioned that the UK’s fundamental background has been so alarming in recent months that it’s hard to imagine what could have forced market participants to make quite serious and lengthy purchases of British currency. Yes, the situation in the United States is also very complicated. The country is covered by a political crisis, a racist scandal, and Donald Trump, instead of working for the good of his country and nation, is more engaged in “sprinkling mud” on his rival in the upcoming presidential elections of Joe Biden and China. Nevertheless, there are no less political and economic problems in Britain. We have repeatedly spoken about economic problems. The absence of a deal with the European Union, a strong drop in the already weakened “divorce” of the British economy from the European Union due to the pandemic crisis, annual losses of 70-80 billion euros due to Brexit and a host of other amenities. In addition, the government of Boris Johnson, from our point of view, failed the fight against the coronavirus, and also did not achieve any significant victories in almost a year of rule. The only thing that can be credited to Johnson and his team is that Brexit seems to take place, however, did the British want such a divorce from the European Union in 2016? Without agreements, without a deal. Indeed, in fact, Brexit will be “hard”, which was blocked by Parliament for three years until the British, by their decision in the parliamentary elections in December 2019, made it clear that they were ready to complete Brexit as soon as possible if it ended soon. As a result, Johnson received unlimited power. But how he disposes of this power is slowly becoming clear. In general, a foggy and rainy future is still hanging over Great Britain. There is little certainty, which is why it is very surprising for us to observe such a strong growth of the pound. Nevertheless, as we have repeatedly said, no currency can go up continuously.

No macroeconomic statistics have been received from the UK over the past two weeks (except for minor business activity indices, which in the current conditions have practically no significance). For most of the new week, Great Britain will still not receive any important information. Britain will finally provide the necessary information for traders only on Friday, June 12. On this day, a report on industrial production for April will be released, which, according to forecasts, will decrease by 18% in monthly terms and by 22% in annual terms. Given the forecasts for industrial production in the EU and Germany, such figures are not even very surprising. Data on GDP for April will also be released on Friday. In monthly terms, the indicator will lose about 20%, in quarterly terms – 12%, in annual terms – 24%. Obviously, such statistics are unlikely to support the pound. Even if it is not so disastrous.

The most interesting data and messages for the upcoming week will come from the United States. Take note of the next Fed meeting on Wednesday. The key rate is expected to remain unchanged at 0.25%. Thus, the only question is whether the QE program will be expanded or any new program to stimulate the economy launched? Although, given the fact that the Federal Reserve has already expanded its asset repurchase program to almost limitless proportions with the slogan “how many dollars are needed, we’ll print as much,” it is unlikely that any changes will follow here. Therefore, the most interesting event will be Fed Chairman Jerome Powell’s speech at the press conference. Recall that last week, his ECB colleague Christine Lagarde made several important and interesting statements regarding the prospects for the European economy. Powell can do the same. The Consumer price index for May is also set to be released on Wednesday. According to expert forecasts, in annual terms, inflation will slow down to 0.2%, and core inflation (excluding food and energy prices) will drop to 1.3% y/y. However, inflation at this time is far from the most important, so it is unlikely that traders will pay attention to them.

The United States will issue another report on applications for unemployment benefits on Thursday, which has not caused a strong public outcry in recent weeks, as the numbers continue to decline steadily. Nevertheless, the number of new initial applications for the week of June 6 can still reach 1.5 million. The number of secondary applications is expected at around 20 million, which, in fact, is real unemployment. No important reports are planned for America on Friday.

Thus, from our point of view, the most interesting event of the week will be the Fed meeting and Powell’s speech. Traders can ignore all the data, as both economies fall almost synchronously. Next week, events related to the racist scandal in the United States, the confrontation between China and the United States and its development, and, of course, Donald Trump’s new matches and tweets will be of greater importance. And of course, the technical picture of the pound/dollar pair will be of great importance. Recall that whatever the fundamental background, whatever the expectations, until market participants get rid of the pound or buy the dollar, the pair will not fall. Thus, we still advise you to follow the trend and consider trading for an increase until the quotes are above the critical line.

In technical terms, the pair continues its upward movement and has reached the volatility level of 1.2727 last Friday. Thus, despite the fact that the correction did not start on the last trading day of the last week, it can still begin on Monday. Turning the MACD indicator down will signal exactly that. The first goal of the correction will be the Kijun-sen line, and if it is crossed, we can expect a change in the trend to a downward one. 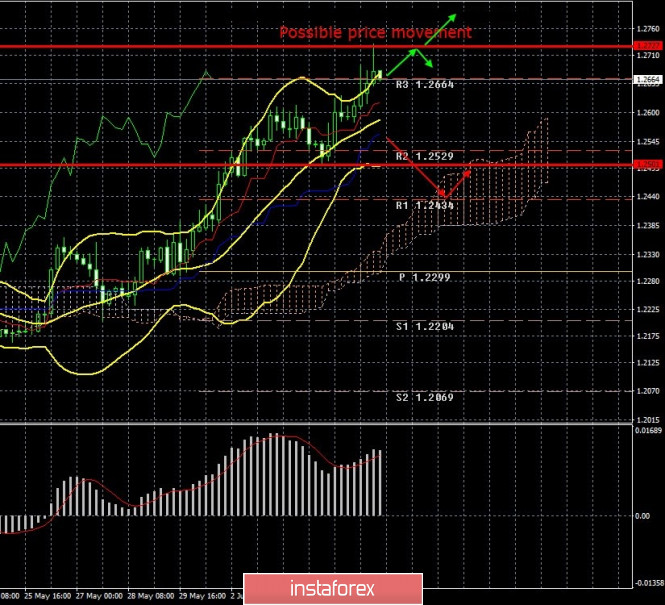 Recommendations for the GBP/USD pair:

As the upward trend continues for the pound/dollar pair, we advise you to continue buying it, using mainly the readings of the 4-hour timeframe. Volatility remains the same, about 100-130 points per day, there are no signs of a new panic. All goals for long positions last week have been reached and overcome. New trading targets will be formed on Monday.