Exactly a month has passed since my article, where I doubted the possibility of continued growth in the price of gold, assuming that the current situation in the positions of traders in the futures market implies at least consolidation and a maximum decrease. Today, when the Open Markets Committee makes its decision, and the US Federal Reserve Chairman Jerome Powell comments on the situation in the global economy, I again want to consider the prospects of the precious metal in the context of the current situation.

Despite the fact that the demand for gold consists of the consumption of jewelry, technology, investments, and purchases of central banks, in my opinion, investment demand and the positioning of futures market traders, the so-called price trend, have the greatest impact on the price of the precious metal.

Why is investment demand, and not demand for jewelry, affect the price? I don’t have a definite answer, but it can be assumed that the main demand for jewelry is concentrated in Asia – in India and China, while the price of gold is denominated in US dollars. In addition, demand from the jewelry industry is stretched over time and is associated with economic cycles, while demand from investors has a shorter vector and is influenced by factors such as opportunity cost, risk appetite, and estimated price forecasts. Moreover, the demand from exchange trading funds (ETFs) investing in gold and its derivatives predominates in the structure of investment demand (Fig. 1).

From chart 1, the dynamics of gold and investment demand, it is clearly seen that ETF investments and price move in a coordinated manner. Rising prices, increasing demand from ETFs and vice versa. What can not be said, for example, about purchases of physical and monetary gold? However, there are certain drawbacks to this scheme. Since the data on demand from exchange-traded funds are published late, we can’t say that it’s primary – investor demand or rising prices due to other factors leads to investment demand from ETFs.

As follows from the latest data published by the World Gold Council, May investments of exchange trading funds acquired to 154 tons or 8.5 billion dollars. At the same time, the total volume of investments in exchange-traded funds reached a new historical maximum of 3,510 tons, which is more than that of any single country except the United States (Fig. 2). 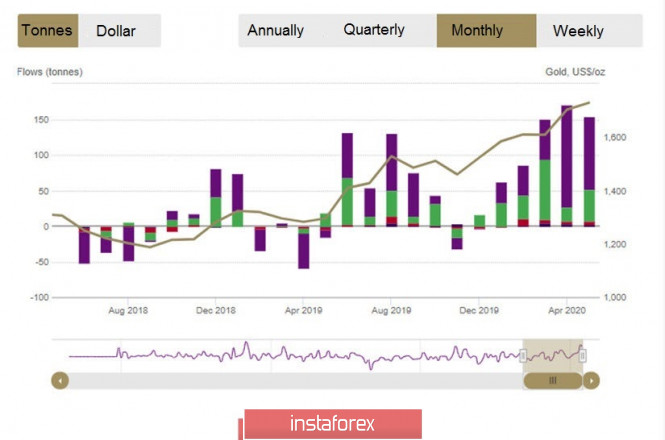 However, from the point of view of assessing short-term price prospects, namely, they are most interested in traders trading in InstaForex terminals, the most productive and valuable for analysis is the Trader Obligations Report – COT Report, published by the US Commodity Futures Commission – CFTC. Where the prospects for the growth of gold futures prices are determined by the influx of new money into the market and the behavior of a group of traders called Money Manager, also called speculators.

COMEX-CME is the largest trader in futures contracts, and it is precisely its indicators that determine the current demand for gold in the world. Moreover, in the past few years, in the issue of determining prices, this exchange has even outstripped London, which is considered the standard of pricing. The aggregate open interest of all other exchanges in the world barely reaches 1/3 of the open interest of COMEX-CME, but if this opportunity is provided, then why not take into account all the data without neglecting any of them? (Fig. 3)

As follows from Diagram 3, since March 2020, Open Interest in gold futures has been steadily declining. A slight increase in OI was observed in April and May, but then the OI actually fell to its minimum values since June 2019. It was only less in April 2020, which contradicts the investment demand for gold from the ETF, which, as we already know, is very high and at maximum values. Investors have never bought so much gold. In other words, while speculators are getting rid of gold, investors continue to buy it.

The physical meaning of the Open Interest indicator is that it indicates the influx of new money, which is a reflection of supply and demand. Thus, analyzing this indicator, in its current state, we can conclude that money leaves the futures market, and it leaves quite stably throughout the entire second quarter. There is a clear contradiction between the indicators of the futures market and exchange-traded funds, which, however, is not surprising. Professionals work in the futures market, and investments in ETFs are mainly made by the public and funds that follow the market and carry out the orders of their clients.

Another proof that gold does not want to increase in price will be the behavior of the Money Manager group of traders on the SME exchange. According to the COT Report, since February 21, the long positions of speculators, which are the main buyers of gold, have decreased from 320 thousand contracts to 169 thousand contracts, i.e. almost doubled. At the same time, their short positions, on the contrary, increased from 0 to 32 thousand contracts. Such a low demand of this group of traders earning in the gold market has not been observed since June 2019, and there are no prospects for its recovery so far. From this fact, we can conclude that investors in stock exchange trading funds are late in their perception of the situation, we also do not know their current mood.

As another signal indicating a possible decline in gold, we can consider the situation on the stock market of gold mining companies. In late May and early June, stocks of miners suddenly began to decline sharply for no apparent reason. The overall decline occurred amid rising stock indices. Investors pulled out of gold miners amid declining fears of a pandemic and the recovery of stock markets. In this regard, a logical question arises: why should investors sell shares of gold mining companies if they suggest an increase in the price of gold?

Nobody knows the future, but analyzing the positions of traders and the current situation, today we can say with certainty that in June and July of this year, the chances of a decrease in the price of gold are much higher than the chances of its growth. At least that’s what the situation looks like when you look at it from today. The opposite scenario, when gold continues to rise, in my opinion, is possible, but only in the case of falling stock markets, when gold will again begin to fulfill its function as an asset of refuge.

Today, the Open Markets Committee will unveil its decision, and the head of the Fed will share his vision of the prospects for the development of the American and world economy. Such events often become a turning point in the dynamics of markets. Be careful and follow the rules of money management.