The EUR/USD pair continued its upward movement on June 3. This time the pair managed to grow by another 70 points or so, and also overcome the resistance level of 1.1205. Thus, nothing has changed over the past trading day. Buyers continue to dominate the market. At the moment, there is no sign of the beginning of a downward correction. The pair continues to gently trade inside the rising channel, without going beyond it. Thus, the bears have no reason to open short positions. At least the market participants can count on a correction, but in the current conditions, for its identification, consolidating under the ascending channel will be required. We remind you that in addition to the channel, there are also two upward trend lines that also support traders to increase. 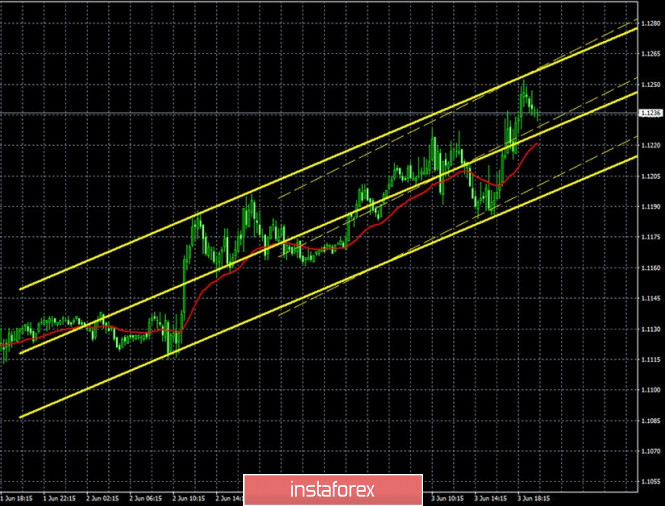 We see the same picture on the 15-minute timeframe. Two linear regression channels, both still pointing up and clearly signal an upward trend. Thus, at the moment, there is not a single signal that traders can use regarding the completion of the upward trend, even on the lowest timeframe. 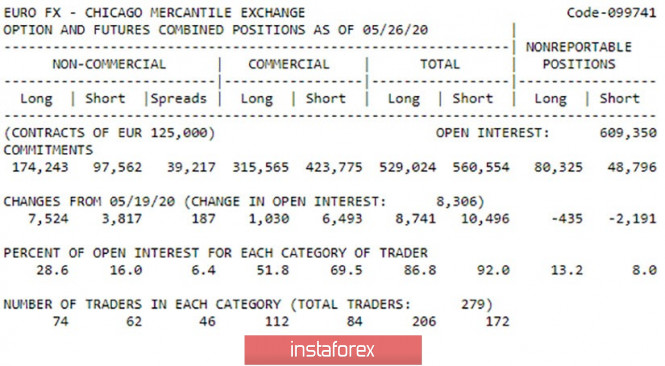 The latest COT report showed that professional traders unexpectedly started buying European currency during the reporting week. Suddenly- because, from our point of view, the fundamental background was not in favor of the euro. However, over the course of the current week, it became expectedly in favor of the euro due to mass rallies and protests in the US. Large traders found reason to open new 7524 purchase contracts last week. For the reporting week, only 3817 sales contracts were opened, if we take into account the most important group of traders – professional players who work in the market with the goal of making a profit due to exchange rate differences. This information is already enough to understand that the mood of large traders for the reporting week has changed to bullish. The beginning of the new week also remains with the buyers, so in the new COT report we can see an even greater increase in purchase contracts among professional traders.

The overall fundamental background for the pair remains neutral, if only economic news is taken into account. However, today it may shift a little in the direction of the negative. On June 4, the results of the ECB meeting will be summed up and traders are waiting for changes in the parameters of the PEPP economic stimulus program, or rather its expansion. In addition, the ECB will hold a press conference and announce forecasts for 2020 on GDP and inflation. It is expected that forecasts will be adjusted for the worse, and ECB representatives will not be able to reassure and inspire optimism in the markets. However, market participants still want to work out all this information. It is no secret that in recent months most of the macroeconomic information has been ignored, and programs for quantitative easing and stimulating the economy are expanding in many countries. Thus, traders’ reaction to the ECB’s decision may simply be absent. But market participants continue to closely monitor what is happening in the United States and, as riots, rallies and protests continue there, they continue to sell the US currency. Thus, from our point of view, the topic of riots in the United States is now in first place in terms of importance.

Based on the foregoing, we have two trading ideas for June 4:

1) It is possible for quotes to grow further with the goal of the resistance level for the 4-hour chart at 1.1312. However, for this, the bulls just need to continue to stay within the rising channel. Stop Loss levels can be placed below the channel and gradually transferred to the top. Potential Take Profit in this case will be 70 points.

2) The second option – bearish – involves consolidating the EUR/USD pair under the rising channel, which will allow sellers to join the game and start trading down. However, we also recommend waiting for consolidation below the Kijun-sen line, and then open short positions with targets at 1.1010 (upward trend line) – 1.0945 (Senkou Span B line). Overcoming each of the barriers will keep sales open. Potential Take Profit range from 130 to 180 points.