The EUR/USD pair continued its downward movement and crossed the critical Kijun-sen line on the hourly timeframe on June 12. After about two weeks of continuous and virtually recoilless growth, the pair still began to decline. However, so far this downward movement falls only under the definition of a correction. Two upward trend lines remain in force, which maintain the relevance of the upward trend. Thus, buyers could only retreat temporarily. In the coming days, we expect continued movement to the first trend line. Overcoming it will allow us to consider the bears’ intentions much more seriously. The pair’s downward movement to the Senkou Span B line should also be noted, which is a strong support, so a rebound may occur from it. Thus, even with another 100 points down, the bears can push the pair relatively easily. Furthermore, they will need additional efforts and reasons to continue to trade down. 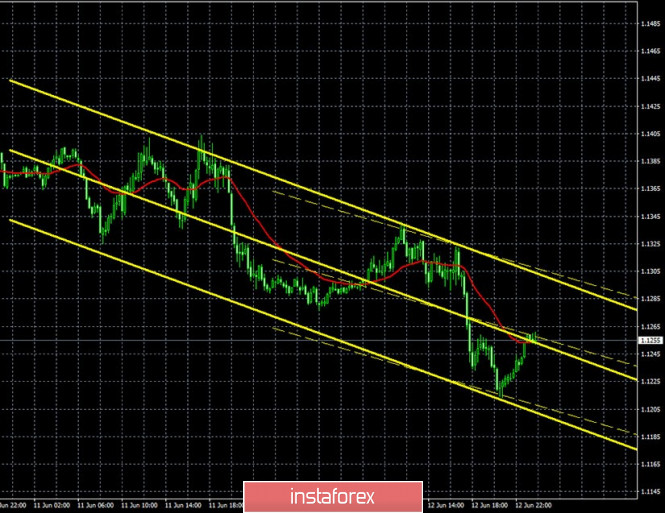 Both linear regression channels finally turned down on the 15-minute timeframe, so we now have a downward trend on the shortest timeframe, which has developed over the past two days. 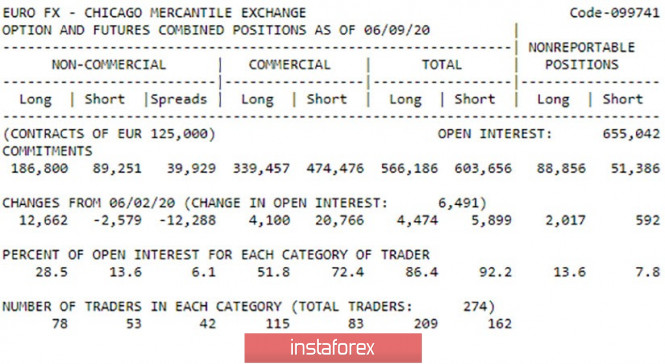 The European currency continued to rise in price for most of the past week. Thus, we made assumptions that professional market players have invested in the euro currency, respectively, according to the latest COT report, the number of buy positions should have seriously increased. Or the number of contracts for the sale of the euro will seriously decrease. As a result, the report showed the implementation of the first option. The number of open buy positions increased by 12,662, while sales contracts were reduced by large traders (by 2,579). Thus, even a double effect was obtained. As for the general changes among all categories of traders in the COT report, it is the number of sell deals that has grown over the past week. However, as we all perfectly understand, it is speculators who drive the market, and accordingly, it is their actions that interest us first of all.

The overall fundamental background for the EUR/USD pair remains neutral. During the last trading day of the past week, no important publications were published either in the United States or in the European Union. However, the pair did not stay in one place during the day, but adjusted, so we continue to insist that technical factors are now the most important and significant in predicting the movement of EUR/USD. In general, the entire macroeconomic background now boils down to completely failed reports for April-May, and it does not matter which country it is about. The coronavirus crisis hit absolutely all countries of the world, even those where the epidemic itself was not large-scale. The modern economy connects all countries very closely with each other. Therefore, even if the epidemic was only in China, other countries of the world would still suffer. Well, the most interesting events are still taking place in the US. It seems that the whole world is most interested in the topic of the US presidential election, as well as the personality of Donald Trump. More and more analysts believe that the American president has made too many mistakes in recent months. Trump’s political ratings continue to fall, while Sleepy Joe can be renamed “silent and wise Joe.” Joe Biden gives an extremely small number of comments, practically does not pour mud on his opponent, and his ratings continue to grow, because Trump does, in principle, all the work for his main opponent. There is no new information on the topic of China-US trade confrontation. Not a single important macroeconomic report is planned on the first trading day of the week.

Based on the foregoing, we have two trading ideas for June 15:

1) So far, the bulls have released the initiative from their own hands, so the EUR/USD pair may continue the downward movement. Therefore, after overcoming the Kijun-sen line, we recommend selling the pair with goals of the Senkou Span B line (1.1158), the trend line (1.1100) and the support level of 1.0974. Potential Take Profit range from 90 to 270 points.

2) We recommend considering the option to resume the growth of the EUR/USD pair if the bulls manage to return to the area above the critical Kijun-sen line, as well as above the resistance area of 1.1326-1.1339. Then we will recommend buying the euro again with targets at the resistance levels of 1.1417 and 1.1542. Potential Take Profit in this case is from 70 to 190 points.