The pound/dollar, as well as the euro/dollar, continued its downward corrective movement on Friday, June 12. Thus, most likely, in recent weeks, traders have been getting rid of the US dollar more than buying the euro and the pound. Selling the US currency ended last Wednesday. We still cannot say for sure what were the reasons for the dollar’s two-week fall, there could be a huge number of them. However, at the moment, the upward trend still persists, since the trend line (upward) remains below the price, which means that it continues to support buyers. We believe that the pound’s rise has ended. If the euro’s growth can still be justified logically and fundamentally, then it is still difficult to say why the pound has grown with all the problems of the British economy and Brexit. One way or another, the pound has increased and is now ready for a new long-term fall. At the same time, until the trend line is overcome, the upward movement is still the main option for the development of events. 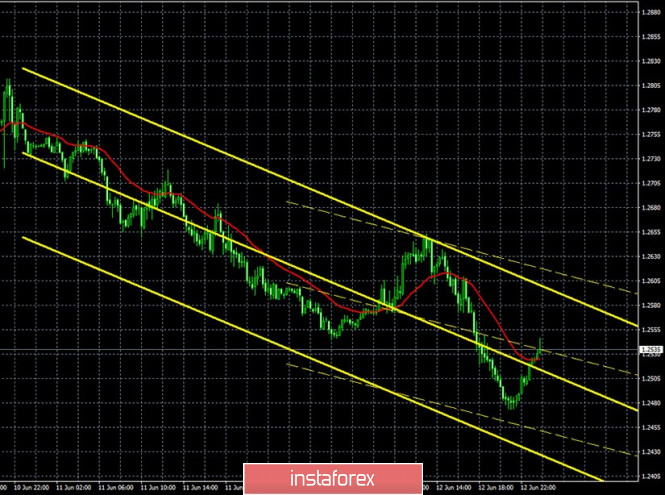 Both linear regression channels turned down on the 15-minute timeframe, so the trend reversed. All goals are defined on an hourly timeframe. 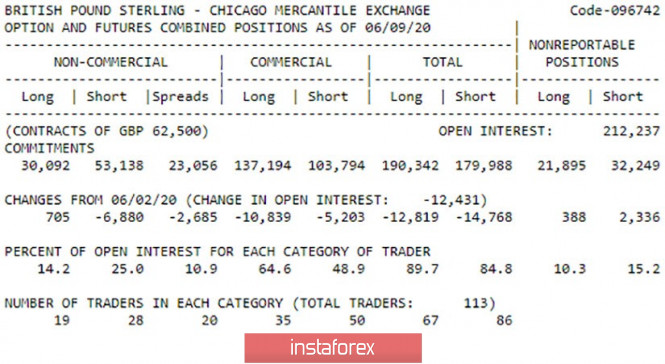 The latest COT report for the British pound, published on Friday, showed a strong drop in the number of open purchase contracts among professional traders. Their number decreased by almost 7,000, but there were only 705 new open buy-positions. Thus, traders didn’t really buy the pound, nevertheless, it was the British currency that went up in price. If you look at the behavior of all categories of large traders in the reporting week, then they closed both purchase contracts and sale contracts. A total of 25,000 contracts were closed. Thus, in general, the pound was not in demand, but at the same time it was growing against the dollar. Such is the paradox.

The fundamental background for the GBP/USD pair remains unchanged. No new information on the negotiations between Brussels and London. No new news from Boris Johnson. So far, all the news and expectations of traders are reduced to a personal meeting between the British prime minister and EU leaders, scheduled for June 18, during which there will probably be some shifts in the negotiations. However, there is little chance of this. Moreover, the fact that Boris Johnson will go to Brussels, and the fact that he will be able to move the negotiations off the ground. In the first case, the coronavirus can interfere, in the second – London’s lack of desire to concede in the negotiations an unnecessarily “hard” position. On Friday, it became known that UK GDP fell in April by 20.4% in monthly terms, which is even worse than the most pessimistic forecasts. The same fate awaited the volume of industrial production, -24.4% y/y and -20.3% m/m. Thus, we can even conclude that on this day, the pound became cheaper for no reason, since with such statistics it would be very difficult to count on strengthening. Nevertheless, we believe that the pound would continue to fall without these statistics. There will be calm news in the UK and the United States on Monday, June 15th, and traders will have to be content with a new stream of interesting information from the White House, which will be designed to entertain market participants until really important statistics or messages appear.

There are two main scenarios as of June 15:

1) The initiative for the pound/dollar pair remains in the hands of buyers, as the trend line remains relevant. Therefore, formally, it is now relevant for the long positions with the targets of the Kijun-sen line (1.2641) and the resistance area 1.2719-1.2759. The price rebound from the Senkou Span B line can even be interpreted as a buy signal. At the same time, we recommend that you trade and increase, then be extremely careful. Potential Take Profit in this case is from 100 to 180 points.

2) Sellers at the moment have fulfilled corrective goals. Now you need to wait to overcome the Senkou Span B line or the trend line in order to conclude that a new downward trend is forming. In this case, it is recommended to resume lower trading while aiming for the support area of 1.2194-1.2214. In this case, Take Profit will be about 180 points.