The pound/dollar on Friday also tried to continue to move up, however, unlike EUR/USD, it failed to do so. In general, the entire movement of the GBP/USD pair remains weaker, although it still persists. An attempt was made to overcome the local May 26 high, but it failed. Moreover, a strong resistance area of 1.2402-1.2423 and a resistance level of 1.2399 are waiting for the pair above. Thus, there are immediately three obstacles that can stall upward movement. Buyers of the British pound continue to doubt the appropriateness of these trading operations. If the general fundamental background is approximately the same in the EU and the US, therefore, we can expect movement in different directions, then in the pound/dollar pair’s case, the fundamental background remains weaker in the UK than in the US. Thus, the upward trend still remains, but in the near future, bears can begin to put pressure on the pair and try to overcome the upward trend line. 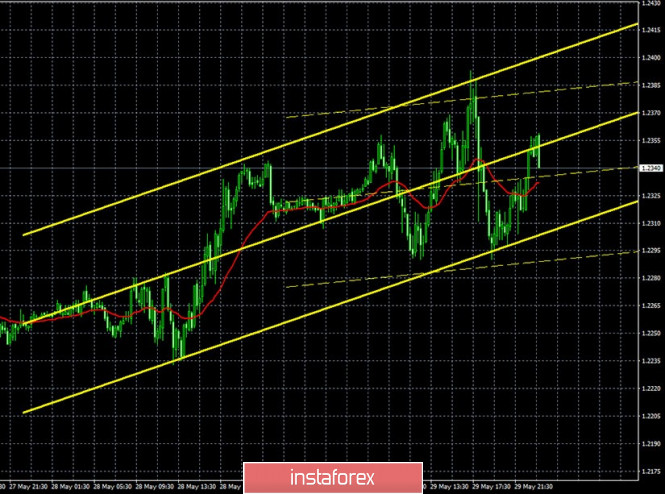 Both linear regression channels continue to be directed upward on the 15-minute timeframe, therefore, there are no signs of an upward trend ending here. However, as we said above, it will be difficult for buyers to overcome the resistance area, which is located higher. Therefore, both channels can begin to turn down at the beginning of a new trading week and month. 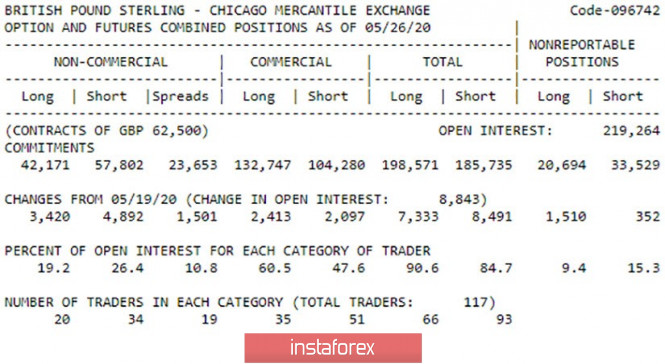 The same picture as for the euro/dollar pair. Despite the fact that in total the demand for the pound did not change among all major traders during the reporting week (a total of 8600 contracts for buying and selling were opened), professional players mainly bought the pound – plus 5205 contracts, and from contracts for sale they, on the contrary, got rid of (-1,686 contracts). Thus, the mood of traders remained upward and at the end of last week the situation, in principle, did not change. But in order for the upward movement to continue, it is necessary that large traders continue to invest in the British currency, and for this we need reasons and reasons, which, in the pound’s case, are now quite difficult to find.

The fundamental background for the British pound remains negative. No macroeconomic report was published in the UK during the previous trading week. However, it is obvious that the British economy continues to experience serious problems. If US GDP could lose about 5% in the first quarter, then it might be more for Britain’s GDP. In addition, exactly one month remains until July 1, when London and Brussels will have to announce the end of the “transition period” on December 31, 2020. Negotiations between the parties on a comprehensive deal are being conducted more “for the sake of now.” The last three rounds did not bring the parties closer to signing the agreement and showed that no progress was made on the most complex issues. In the second half of June, British Prime Minister Boris Johnson will personally travel to Brussels to negotiate with Ursula von der Leyen and other EU top officials. However, hardly anyone expects the prime minister to be able to “smooth the corners” between the parties in a couple of days. Most likely, he also will not be able to agree, and he will return to London with nothing, but once again he will be able to declare to the public that he tried to negotiate with the EU, but the bloc does not want to concede.

We have two main options for the development of the event as of June 1:

1) The initiative for the pound/dollar pair remains in the hands of the bulls, however, further upward movement will be possible only after breaking the resistance line of 1.2361. If this happens, it will be possible to open small purchases while aiming for the resistance area of 1.2402 – 1.2423. We recommend considering larger and longer-term purchase transactions only if this area is overcome with a view to the resistance level of 1.2502. Take Profit will amount to around 30 points in the first case and 70 in the second.

2) Sellers continue to remain in the shadow, but will be ready to join the game below the ascending trend line. If the pair is fixed below this line, we recommend resuming sales of the GBP/USD pair with the targets of the Senkou Span B line 1.2206 and the May 18 low at 1.2073. In this case, Take Profit will be about 55 to 180 points.

Source: Hot forecast and trading signals for the GBP/USD pair on June 1. COT report. Negotiations on Brexit continue "for the sake