Home » Forex Technical Analysis » Hot forecast and trading signals for the GBP/USD pair on June 12. COT report. Will the April GDP collapse in the UK help

The pound/dollar, as well as the euro/dollar, began to fall yesterday, which is still interpreted as a downward correction. Nevertheless, the quotes still failed to confidently overcome the important resistance area of 1.2719-1.2759, as well as the resistance level of 1.2821. Most likely, as in the case of the EUR/USD pair, buyers simply became saturated with long positions and began to reduce them slowly, which led to an increase in the supply of the euro currency in the market and, as a result, to the pair’s fall. Consolidation below the Kijun-sen line is also a signal for further movement down, in the direction of the ascending trend line, which all this time continued to support traders to increase. The Senkou Span B. strong line also lies near this line. In general, these two lines are the immediate goals for the bears, which can try to build on their success, given the somewhat dubious solidity of the previous growth of the British currency. As we have said more than once, there are no reasons for the pound’s growth from the UK. Everything is extremely confusing now in the United States, but there were no clear reasons for the dollar’s fall either. 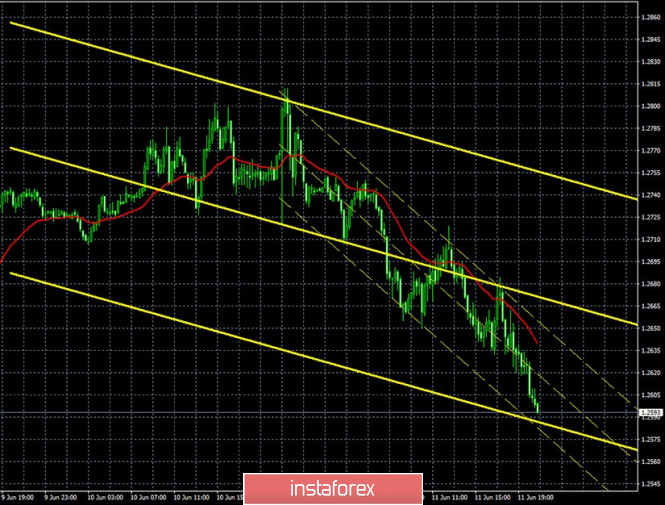 Both linear regression channels turned down on the 15-minute timeframe, therefore, for this currency pair, the trend was more likely to change to a downward one. Goals are defined on the hourly timeframe. 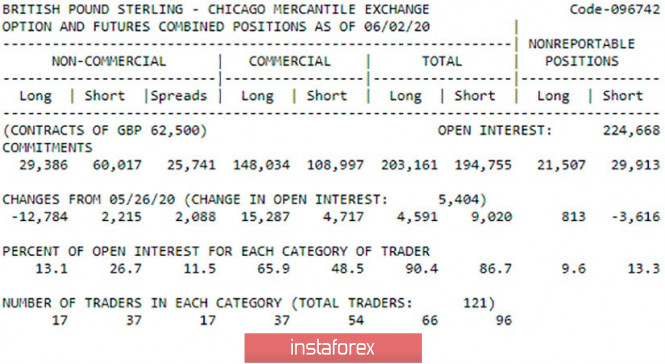 The latest published COT report for the British pound showed that professional players intensively reduced purchase contracts (-12,784 contracts) during the reporting week, and the total number of sales contracts for all groups of large traders increased by 9,000 (there were the largest number of sales contracts for 4,000). Thus, even the COT report by all means showed how strange it is for the British currency to strengthen. However, during the reporting week, the pound continued to rise in price, and if the new COT report, which is released today, again shows an increase in net sales contracts, this will cause even more bewilderment of what is happening in the foreign exchange market. And at the same time, we will be assured that a strong drop in the British pound is not far off.

The fundamental background for the GBP/USD pair does not change at all. At least because some important news from the UK comes on holidays. There are no positive important messages at all. The latest data that traders could use was mixed and ultimately was ignored. Great Britain will finally receive several macroeconomic reports on June 12 that could affect the movement of the currency pair. In recent weeks, there was an impression that traders do not really need a fundamental and macroeconomic background. Nevertheless,we will learn about the change in industrial production for April today, as well as GDP for the same month. The first indicator is expected to decrease by 19.3% in annual terms and 15% in monthly terms. The second is likely to lose 18.4%. On the one hand, such figures should cause a reduction in demand for the pound sterling. On the other hand, there is nothing surprising in these figures, and they are unlikely to cause shock among market participants. Thus, we believe that traders will continue to trade according to their strategies and conclusions, paying only indirect attention to statistics.

There are two main scenarios as of June 12:

1) The initiative for the pound/dollar pair remains in the hands of buyers, as the trend line remains relevant. Therefore, formally now long positions are relevant with the goal of resistance level of 1.2979, but now you are advised to wait until the level of 1.2821 is overcome before you open new longs. Potential Take Profit in this case is about 140 points.

2) Sellers currently have the opportunity to sell the pair with the goal of the Senkou Span B line (1.2468). If this line is overcome along with an upward trend, then it will finally change to a downward trend for the pound, and sell orders will become relevant with the target of the support area of 1.2196-1.2216. In the first case, Take Profit is about 120 points.

Source: Hot forecast and trading signals for the GBP/USD pair on June 12. COT report. Will the April GDP collapse in the UK help