The markets continue to rally in the wake of lifting quarantine measures to those countries affected by coronavirus pandemic. The recent statistics on the economies of significant countries indicate that, most likely, the full negativity remained in the past, which is the main reason for the continuation of the global depreciation of the dollar.

The ICE dollar index against a basket of major currencies received significant pressure against the backdrop of a sharp increase in the single currency rate amid the expectation of the ECB decision to significantly expand the scope of stimulus measures. It is assumed that following a meeting of the European regulator, a decision will be made on the volume of asset purchases of up to 750 billion euros.

How can the euro react to such an event? In our opinion, the very fact of the adoption of this program may become a reason for taking profits on the main currency pair EUR/USD, as well as the EUR/JPY and EUR/GBP pairs, which have quite recently added. Against this background, and due to the local technical overbought common European currency, we can expect a local correction, which can become a good reason again for its purchases after the correctional decline.

The dollar may receive local support on Friday if data on employment and the number of new jobs in the States are better than predicted. But again, as it seems to us, this will only be the basis for profit taking and nothing more. The dollar has no chance to turn around and, changing the trend, persistently increase. The large-scale stimulus measures from the US Federal Reserve and the Treasury Department, taken earlier, significantly weaken the dollar due to its widespread representation in the financial system. If at the peak of the COVID-19 pandemic, it was perceived as a safe haven currency due to fears of a wide range of investors who went into the dollar cache, recently it has been perceived as a borrowed currency, a funding currency.

To sum everything up, it can be noted that there is a high probability that a correction in the markets should be expected today – stock, commodity and raw materials, as well as a local increase in the dollar before the publication of data on employment in America on Friday.

Forecast of the day:

The GBP/USD pair has already declined below the level of 1.2550, which is likely to contribute to its local decline to 1.2475. 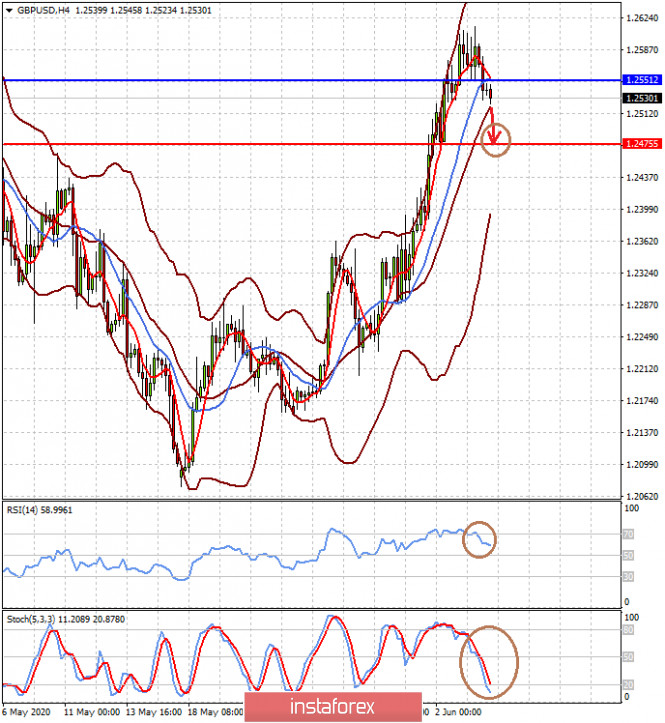 Source: Markets are highly likely to correct before the release of NFP data in the US (a local correctional decline in EUR/USD and