Home » Forex Technical Analysis » Overview of the EUR/USD pair. June 12. Every day is the same. The dollar is falling. Donald Trump is busy with his election

The EUR/USD currency pair continued its upward movement for most of June 11 as if nothing had happened. Yes, the movement has weakened in recent days, however, nothing has changed at all. The minimum correction a couple of days ago was so minimal that it didn’t even reach the moving average. The night before last, there was an event that could have an impact on the currency market. But again, it didn’t. The Fed meeting is always a high-profile event, however, this time the US regulator did not make any important decisions. Moreover, Jerome Powell’s speech and the text of the final FOMC communique did not contain anything super interesting for traders. It can only be noted that the Fed lowered its forecasts for GDP, unemployment, and inflation for 2020, which is not surprising, given the scale of the pandemic and the damage caused to the economy around the world. Thus, neither technical factors, nor fundamental, nor macroeconomic, nothing can now make traders stop selling the US dollar. We can only continue to follow the trend, which we recommend to market participants. There is no point in trying to guess the points of a possible downward turn on such a strong and almost recoilless upward trend.

During the past day, neither the European Union nor the United States had a single important and significant publication. Only reports on applications for unemployment benefits in the US were published, which showed a new 1.5 million primary applications and a total of 21 million secondary applications. However, if at the beginning of the pandemic and crisis, these figures were almost a priority for traders, as they were striking in their size, now, seeing every week plus several million unemployed, no one will be surprised by this. Moreover, the US dollar continues to fall in price for two weeks in a row, so any weak macroeconomic statistics from overseas do not weaken it further. Moreover, it should be understood that initial applications cannot be summed up to get the total number of unemployed in the country. A more or less real state of affairs shows the indicator of secondary applications. And their number is practically not increasing, so we can say that real unemployment has stopped growing.

At the same time, US Treasury Secretary Steven Mnuchin said that the US economy has already begun to recover and will show the greatest growth in the third and fourth quarters of 2020. The Finance Minister also believes that “the country is well prepared for a strong, gradual resumption”. However, these are not the most important news at this time. In fact, when the conflict between China and the United States was paused once again, everyone forgot about the “coronavirus” in the USA, the topic of rallies and protests also ceased to interest traders and investors, the country’s economy is slowly recovering, the main newsmaker Donald Trump remains. First, there are simply no other news and events in the world right now. Second, it is Trump’s actions at this time that will determine who wins the presidential election in November. Third, the future of the United States will depend on it. Fourth, the dollar will depend on the future of the United States. We still cannot say for sure what factors contributed to such a strong depreciation of the US currency in the past two weeks. However, the United States, in our view, has long been in a state of sluggish political crisis, which nothing can be done about it. It is impossible to remove Trump from his position and it does not make any sense since he has about six months of the presidential term left. However, more and more politicians and officials are speaking out against Trump’s candidacy. So everyone just has to wait for the election to come and hope that the sweetness will change. However, will it change? The fact that Donald Trump is now 14% behind Biden in support among voters does not mean that the same picture will be observed in November. However, thanks to the racist scandal and protests across the country, as well as the “coronavirus” epidemic, the electoral base has really shrunk a lot. In the current circumstances, the US President decided to resort to a proven scheme. He began to bring back to his team the people who helped him win in 2016. Some members of the Republican party spoke about this on the condition of anonymity. Also, Trump does not forget to use his tools, which are applied to all rivals, competitors, and enemies – insults, dirt, accusations. It is reported that President Trump is going to use the services of David Urban, who helped win in Pennsylvania, Susie Wiles, who helped win in Florida, and some others. It is also reported that Trump is allegedly dissatisfied with the actions of the head of his current election campaign, Brad Parscale, who is actively engaged in promoting Trump’s candidacy on social networks. However, even for those who do not follow the messages from Trump on Twitter, it is absolutely clear that such a means of communication has completely outlived its usefulness over the past 4 years. Initially, it was quite interesting – a new way of communication between the President and the people, which was supposed to bring them closer. However, after a while, it became clear that the President does not maintain his own account, but instead, a whole team does it, so there was no communication “president-citizen”. It soon became clear that Trump created something like a news column from his Twitter account, in which he comments on everything that is happening. At the same time, in most cases, this column was used to throw mud at their competitors, enemies, and others who disagree with Trump’s policies, and not to communicate with Americans and inform them about changes in politics, the economy, and so on. Moreover, later many analysts, experts, and even entire companies began to study Trump’s tweets and it turned out that most of them simply do not correspond to reality. In this case, what confidence can there be in the President and in such a way of communicating with the population? Well, what you can be sure of is that attacks on Joe Biden will resume in the near future. We are not saying that Biden has nothing to attack, however, this is Donald Trump’s favorite way to go to his goals. 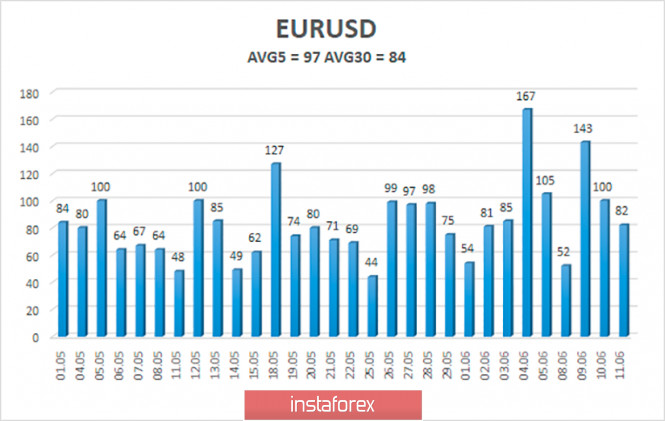 The average volatility of the euro/dollar currency pair as of June 12 is 97 points. Thus, the value of the indicator is still characterized as “high”, thanks to the last trading days. We expect the pair to move between 1.1230 and 1.1424 levels today. A reversal of the Heiken Ashi indicator back up will signal the end of the downward correction.

The EUR/USD pair has started a new round of corrective movement. Thus, long positions with the goals of 1.1424 and 1.1475 remain relevant at this time, but after the price rebounds from the moving average line. It is recommended to return to selling the pair not before fixing the price below the moving average with the first goal of the Murray level “4/8”-1.1230.

Source: Overview of the EUR/USD pair. June 12. Every day is the same. The dollar is falling. Donald Trump is busy with his election