Home » Forex Technical Analysis » Overview of the EUR/USD pair. June 5. The ECB will distribute the money until mid-2021. The EU economy may decline by more

The EUR/USD currency pair started a long-awaited correction on June 4. It started and finished very quickly. In yesterday’s reviews, we assumed that the European Central Bank will expand the program of recovery of the European economy after the crisis caused by the pandemic by several hundred billion euros, which will mean even more easing of monetary pressure. In practice, this is what happened. The ECB’s ultra-soft monetary policy became even softer, however, the regulator had nothing to do. The crisis has dealt a painful blow, and the EU economy needs to be saved while there is still something to save. But the reaction of traders to what is happening once again raised a huge number of questions. It should be noted immediately that when the results of the ECB meeting were published, the euro currency first soared up, and then immediately began a downward pullback. Thus, the results of the ECB meeting led only to a small spike in volatility (a total of about 70 points), no more. But the subsequent growth of the European currency was in any case illogical. However, we will try to look at the overall picture and try to figure out what happened yesterday and what to expect next from the euro/dollar pair.

Looking a little ahead, we will immediately say that we are waiting for a decline in the European currency quotes. The euro has risen very much in recent days and all this upward movement has been almost non-recoilless. Thus, at least a technical correction is needed. Further, the main factor that contributed to the strengthening of the European currency was the fall in demand for the dollar due to mass unrest in the United States, as well as due to the uncertainty of future relations between the United States and China. However, we believe that both of these factors cannot have a lasting impact on the EUR/USD pair. Riots, riots, and so on – this is certainly bad, however, when the whole world was engulfed by a severe economic crisis, there are a lot more other bad things that did not have any impact on the dollar. Thus, we believe that the fall of the dollar in recent days was nothing more than an accident or a technical necessity (since one of the currencies can not become cheaper or grow constantly).

In the European Union, the news was bad yesterday. Retail sales in April decreased by 19.6% year-on-year and by 11.7% month-on-month. Although these figures are better than experts predicted, they are not optimistic. The European Central Bank predictably left the key rates unchanged – the deposit rate at -0.5%, the credit rate at 0.0%. But most importantly, the regulator expanded the PEPP (Pandemic Emergency Purchase program) program by 600 billion euros and extended its validity period for six months, that is, until June 2021. Such actions of the ECB can only be regarded negatively since they mean that the Eurozone economy is in trouble and the initial 750 billion euros will not be enough to get out of the crisis. The ECB also said in its final communique that rates will remain at current values until inflation returns to the target 2% y/y. Recall that at the end of May, inflation in the EU was recorded at a level of 0.1% y/y.

Christine Lagarde herself said during a press conference that the ECB expects GDP to decline by 8.7% in 2020. In 2021, according to the head of the regulator, there will be an increase of 5.2%, and in 2022 – by 3.3%. Recall that at the last meeting of the ECB, the following forecasts were announced: 2020 – +0.8%, 2021- + 1.3%, 2022- + 1.4%. Thus, first, in just two months, the ECB has significantly changed its expectations for the worse, and second, it may do so again or several times at subsequent meetings this year. We do not recommend treating the announced figures as accurate and final. The EU economy is likely to lose more than 8.7% this year. The same applies to inflation. According to the head of the ECB, it will slow down in 2020 to 0.3%, accelerate in 2021 to 0.8%, and in 2022 to 1.3%. Christine Lagarde also once again noted that the European economy is facing an unprecedented downturn due to the “coronavirus” epidemic. “Huge job losses, declining incomes, and a high level of uncertainty about the economic outlook have led to a drop in consumer spending and investment,” the ECB Chairwoman said. Lagarde also noted that some indicators show a slight recovery in economic activity, however, it is not enough to talk about the recovery of the economy.

On Friday, June 5, there will be no important or significant publications in the European Union. Thus, traders will have to focus on macroeconomic statistics from overseas (discussed in detail in the article on GBP/USD), as well as all the same events in the US that led the EUR/USD pair to 2.5-month highs. From a technical point of view, a downward correction has been brewing for a long time and we were waiting for it last Friday or Monday. Thus, as before, we do not recommend that market participants try to guess the possible point of price reversal down. It is best to follow the trend clearly, especially since on the hourly chart, quotes continue to move perfectly inside the ascending channel, signaling the absence of any corrections or even hints of them. Therefore, to identify the beginning of the correction, you need to either wait for the Heiken Ashi indicator to turn down or for the pair to exit the ascending channel on the hourly chart. And the last thing I would like to say is that the pound also reacted to the ECB meeting, although it did not apply to it. The British currency also resumed growth in pair with the dollar and this is the strangest thing. There are reasons to assume that the ECB meeting was not the reason for the new strengthening of the euro. 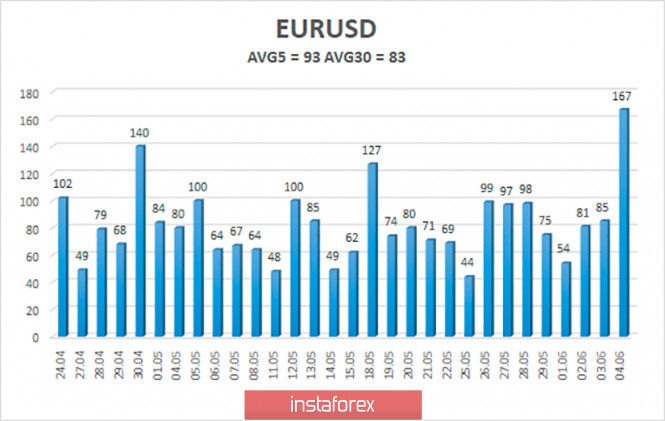 The average volatility of the euro/dollar currency pair as of June 5 is 93 points. Thus, the value of the indicator is still characterized as “average”. We expect the pair to move between 1.1256 and 1.1442 levels today. The reversal of the Heiken Ashi indicator downwards signals a round of downward correction, which is expected for several days in a row.

The EUR/USD pair continues its strong upward movement. Thus, after overcoming the psychological level of 1.1000, buy orders remain relevant, at this time – with the goals of 1.1442 and 1.1475, which are recommended to hold until the Heiken Ashi indicator turns down. It is recommended to return to selling the pair not before the price is re-anchored below the moving average line with the first goal of 1.0986.

Source: Overview of the EUR/USD pair. June 5. The ECB will distribute the money until mid-2021. The EU economy may decline by more