The EUR/USD currency pair continues to adjust at the beginning of the new trading week. However, it is still impossible to say that the correction is strong. Most likely, the pair’s quotes will be able to work out the moving average line, however, it is still unclear what will happen next. Market participants show by their behavior that they are not set up to buy the US currency. And this is although there are not particularly good (and most importantly economic) reasons for buying the euro currency now either. That is, the United States and the European Union are now at approximately the same level of decline after the “coronavirus crisis”. However, in the United States, there is Donald Trump, where the US dollar grew steadily during his first three years of presidency. Trump gave the impression of a strong, though shockingly conflicted leader who does everything for his country and his nation. However, the events of recent months have shown Trump from a completely different side. At first, there was a very fragile truce with China, when more than half of the duties remained in effect. Then the “coronavirus” epidemic began, which affected the United States the most, and Donald Trump was exposed many times in a very unpleasant and sometimes even stupid light, as he made statements that were immediately refuted by scientists and doctors, and completely underestimated the risks and scale of the pandemic. Then, to find those responsible for what happened, Trump began to blame China for everything, without providing any evidence for his words. After that, the situation with Hong Kong and a new batch of Trump’s threats against China began. In the end, America was flooded with rallies and protests after the murder of George Floyd, which has been going on for two weeks and are not always peaceful. And all this against the background of the complete decline of the American economy. As a result, Donald Trump’s political ratings plummeted at cruising speed. There is even an impression that the whole world is set against Donald Trump and we do not exclude that this is true.

Try to remember when there was a president in America who had so many enemies and detractors. After all, for the fourth year, Trump has been fighting with the Democrats, throwing mud at former presidents of the country, the same Democrats, all the officials that he did not like, and organizing trade wars with almost all of the US trade partners. And why then should Trump have many friends inside and outside the country, if the American president does nothing but threaten, insult, fight and conflict with everyone he can? Perhaps even now the US currency is getting cheaper since the strongest political crisis is brewing in the United States? And this is although the stock market has almost fully recovered from the shock in March. Trump’s main opponents now are China and Joe Biden. Tell me, do you often hear statements and/or interviews by Biden or Chinese officials concerning Trump? If you add up all their statements over the past two years, this number will equal the number of tweets and statements by Trump in a couple of days. And most importantly, Trump, who quarreled with everyone with whom he can, sincerely believes that if he continues to blame, this can help him restore his ratings. And Trump’s ratings are now absolutely disappointing. According to the latest opinion polls, the current American president is already 10% behind Biden. And how does the leader of the nation justify such a gap? Right! Via Twitter: “If I hadn’t been subjected to fake and illegal investigations – Russia, Russia, Russia, and impeachment for three years, I would be up 25 points compared to sleepy Joe and the Democrats who do nothing. It is very unfair, but it is what it is.” Donald Trump also added that “he built the world’s strongest economy, for the first time in US history, and continues to do so again”.

At the same time, the leader of the nation begins to lose support even among his party members. Former US Secretary of State Colin Powell said that in the upcoming elections, he will support the candidacy of Joe Biden. According to Powell, Trump “has departed from the US Constitution and poses a huge danger to the country and democracy”. Thus, Powell was one of the first Republicans to publicly “turn away” from the head of the United States. And of course, Trump is criticized by the US population itself, which has repeatedly proposed to solve the problems of rallies and protests by introducing the US army to the most problematic cities and states. Naturally, this approach did not appeal to the protesters themselves, of whom there are many not only in the United States but also abroad. Especially given the fact that most Americans (according to opinion polls) consider Trump a racist.

Well, Christine Lagarde, whose speech was held yesterday in the European Parliament’s Committee on Economic and Monetary Issues, once again stated that in 2020 the Eurozone economy is likely to contract by 8.7%. The head of the ECB also said that in the second quarter, losses are likely to amount to 14% of GDP. Thus, yesterday, Christine Lagarde did not inform the markets anything new and interesting. Accordingly, no reaction to her performance was followed.

On Tuesday, June 9, the European Union will publish the GDP figure for the first quarter, which, according to experts, should lose 3.2% in annual terms and 3.8% in quarterly terms. However, these figures are highly likely to attract no attention from traders, since these are obvious and expected losses of the European economy. No more macroeconomic reports are scheduled for today. Thus, the impact of macroeconomic statistics will be not weak, but rather absent. 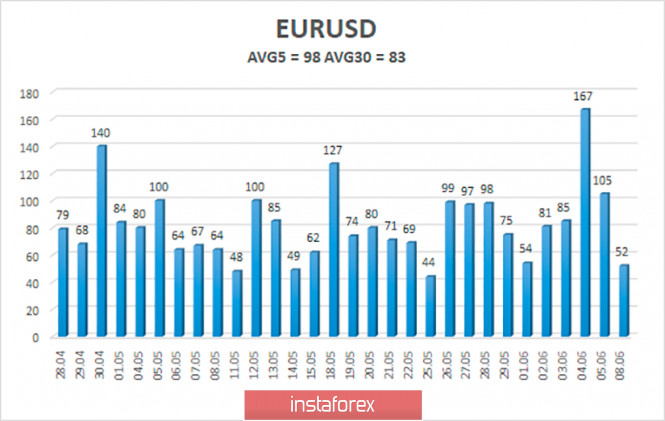 The average volatility of the euro/dollar currency pair as of June 9 is 98 points. Thus, the indicator value is characterized as “high” due to the last trading days. We expect the pair to move between the levels of 1.1200 and 1.1396 today. The reversal of the Heiken Ashi indicator upward may signal about a possible completion of a downward correction.

The EUR/USD pair continues to be adjusted. Thus, after overcoming the psychological level of 1.1000, long positions remain relevant, at this time – with the goals of 1.1353 and 1.1396, but it is recommended to open them after the current correction is completed. It is recommended to return to selling the pair not before the price is re-anchored below the moving average line with the first goal of 1.1108.