Home » Forex Technical Analysis » Overview of the GBP/USD pair. June 11. Nobody is interested in inflation in the United States. "Dead" negotiations between

The British pound continued to rise on the third trading day of the week. At the same time, there were no reasons or grounds for this process on Wednesday, June 10. Thus, the overall picture of the situation on the international Forex market for its two main currency pairs has not changed at all during the first half of this week. The most important thing is that now it is not clear what exactly is the reason for the serious fall in the US currency in the last two weeks. There are plenty of problems in America, however, there are no fewer in the UK. No macroeconomic reports were published again in the UK yesterday. All publications on the Foggy Albion are scheduled for Friday. In the United States, a completely uninteresting consumer price index for May was published, which slowed to 0.1% in annual terms. The core consumer price index fell to 1.2% y/y. Both values were worse than forecasts and the US dollar showed even a small increase in the US trading session. Then it would be more logical to continue falling. By the way, the fall of the pair was not too strong, however, we were once again able to make sure that market participants do not pay any attention to the “foundation” and “macroeconomics”.

However, for the British currency, there are several topics that it is simply impossible to pass by and forget about them as well as Donald Trump about the “coronavirus”. The key topic remains Brexit and the negotiations that are underway between London and Brussels. However, unfortunately for the British pound, no progress was made during the four-week round of negotiations. Michel Barnier, the coordinator for the European Union, said: “After four rounds, I have to say that the British negotiators refuse to engage seriously with us in four main areas.” Naturally, we are talking about fishing, the legal sphere, the economy, and competition. The EU also says that it is not going to force negotiations to meet the “schedule of Boris Johnson”, who refuses to extend the “transition period” and is generally confident that a comprehensive agreement can be signed in 10 months. Brussels believes that if the parties fail to reach an agreement on fisheries, then the remaining issues can not be discussed since there will be no final deal.

In addition, London begins negotiations on a trade deal with Japan. It sounds optimistic, however, Japan is Britain’s fourth most important non-European trading partner. While exports from Britain to the EU account for more than 50% of the total. Thus, even if the agreement with Tokyo is signed tomorrow, it will not affect the overall financial condition of the UK too much. At the same time, it is reported that the European Parliament can veto any deal with London if it does not provide reliable guarantees of fair competition and strict European standards on the environment and workers’ rights. And in any case, we wrote about the low probability of signing the agreement at the beginning of the year. Now it is June and this probability has not increased by one-tenth of a percent.

However, despite all the negativity associated with the negotiations, it is the pound that is now continuing to rise in price. So the reasons for what is happening need to be sought in the United States. We have already listed possible reasons several times. Trump continues to lose support, and meanwhile, more and more members of the Republican party doubt that it is necessary to vote for Trump on November 3. On condition of anonymity, some Republicans gave interviews to the American publication The Washington Post, and it turned out that many prominent and respected politicians doubt that the current President needs to cast a vote. And, from our point of view, this is the lowest point of Donald Trump’s fall – when even his party members do not want to vote for him. Of course, things may still change by November. Moreover, even if some Republicans do not want to vote for Trump, this does not mean that Americans will not vote for him. However, recent ratings say that he loses at least 14% to Joe Biden. Also, many prominent politicians and military personnel who are already retired and who have nothing to fear for their careers continue to speak out. For example, William McRaven, the Admiral who led the operation to eliminate Osama bin Laden, said: “President Trump has shown that he doesn’t have the qualities necessary to be a good commander-in-chief. We have fought the coronavirus epidemic and terrible acts of racism and injustice in which the President has shown none of the leadership qualities.”

On the penultimate trading day of the week in the United States, a report on applications for unemployment benefits is scheduled to be published. However, if in the first weeks of the crisis this report was taken very seriously by traders, now it is not. It is expected that the total number of applications submitted by May 29 will be 20 million, and the number of new primary applications – 1.5 million. Thus, we remain in great doubt that the unemployment rate in the US fell to 13.3% at the end of May, as the US Bureau of Statistics says. In the UK, no important information is scheduled for this day again. However, on this day, a meeting of the Eurogroup will be held, at which the issue of financing the European economy will again be decided.

Technical factors remain the most important and significant for the two main currency pairs. And all technical indicators now show an upward trend, which has no signs of ending. Moreover, there are no signs of the beginning of a downward correction. The Heiken Ashi indicator turned down several times, however, the price was never able to even work out the moving. Thus, bears are not so weak now, they are simply absent from the market. Buyers from time to time fix part of the profit on long positions, which leads to small corrections. Both channels of linear regression remain directed upward, so the trend is upward in the medium and long term. 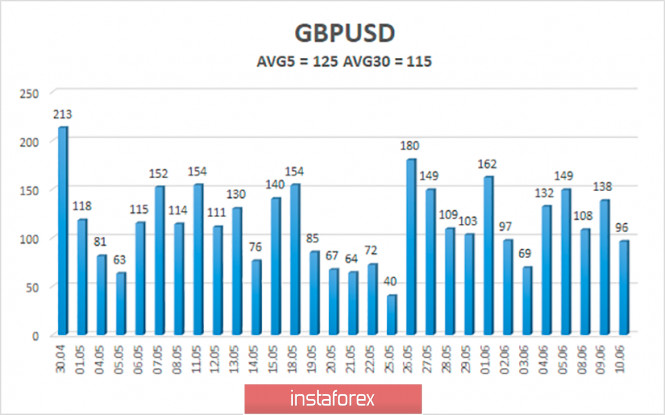 The average volatility of the GBP/USD pair continues to remain stable and is currently 125 points. For the pound/dollar pair, this indicator is “high”, but not too high. On Thursday, June 11, thus, we expect movement within the channel, limited by the levels of 1.2632 and 1.2881. Turning the Heiken Ashi indicator down will indicate a new round of corrective movement.

The GBP/USD pair resumed a strong upward movement on the 4-hour timeframe. Thus, today it is recommended to continue trading the pound/dollar pair for an increase with the goals of 1.2817 and 1.2881 and keep buy positions open until the Heiken Ashi indicator turns down. It is recommended to sell the pound/dollar pair when traders manage to return to the area below the moving average, with the first targets of 1.2573 and 1.2512.

Source: Overview of the GBP/USD pair. June 11. Nobody is interested in inflation in the United States. "Dead" negotiations between