Home » Forex Technical Analysis » Overview of the GBP/USD pair. June 5. Donald Trump was not supported by former US presidents, the head of the Pentagon, and

The British pound on Thursday corrected slightly more strongly than the European currency, however, in the afternoon, it resumed the upward movement. At the same time, as we have already noted in the article on EUR/USD, the main events of the past day – the ECB meeting, Christine Lagarde’s speech – had nothing to do with the GBP/USD pair. However, in the US trading session, market participants still started selling the dollar again, not even reaching the moving average line, which was the most obvious target for correction. Thus, the mood of the market participant remains the same, but the reasons are becoming more ambiguous every day.

To begin with, many US officials have criticized Donald Trump for his desire to suppress rallies and protests as harshly and quickly as possible. Yes, in some cities, the Americans demolished several shops and police stations, but these are the cases that the police should deal with. Most of the protests and rallies are peaceful. Thus, they have nothing to disperse, and even more so there is no reason to resort to the US army for help. Thus, Trump’s intentions and desires were again regarded as an abuse of power. Most of the US governors refused to strictly suppress the rallies, which forced Trump to call them “fools” and many other unflattering epithets. And what attitude should the country have towards a president who does not respect the rights of his population or other high-ranking officials? For example, the former US defense secretary James Mattis, who was fired by Donald Trump in 2018, believes that Trump is “the first head of state who does not even try to unite the nation.” “He doesn’t even pretend to try. On the contrary, it tries to divide us. Now we are seeing the consequences of his targeted efforts in this area over the past three years,” Mattis said. Former US presidents Barack Obama, George W. Bush, Bill Clinton, and Jimmy Carter also supported Mattis’ opinion. The fact that Trump is going to use the “Insurrection Act” of 1807 is criticized by everyone who follows the events. “It was impossible to imagine that our troops would ever be ordered to violate the constitutional right of their citizens,” the former defense minister said. Thus, in fact, Trump wants to disperse the protesters by any means so that the country can return to normal life as soon as possible and begin to restore the economy after the “coronavirus” pandemic. It was clearly not part of his plan that there would be a public revolt that would hit his political ratings even harder. Recall that according to the latest information, the level of support and approval of Trump is inferior to Biden by 8-10%. Thus, the American president really has a low chance of re-election, given all the events of the past three months. But this is not yet the beginning of a new escalation of the trade conflict with China. Recall that China is seriously considering canceling the deal reached on January 15. If this happens, then all of Trump’s efforts in the confrontation with China will be in vain, and his political ratings will fall even more.

Also, the current head of the Pentagon, Mark Esper, went against Trump, who said that his department was not involved in the exercise of police functions and that the law of 1807 could be applied in the most dangerous situations, which obviously do not include peaceful rallies in most places. Well, at that time, Trump himself could not resist the temptation to insult James Mattis several times, calling him a “mad dog” and an “overrated general”.

As for former US presidents, Barack Obama called the current protests the most meaningful of all that he has seen in his life and called on Americans to solve the problem of racism that exists in society. George Bush called on Trump to listen to the protesters instead of “crushing them”. Bill Clinton said that “a white man would hardly have died like George Floyd”.

No important statistics are scheduled for the last trading day of the week in the UK again. Thus, all the attention of traders will again be turned to the United States, where a fairly large amount of macroeconomic information will be published, and then information from the White House and personally from Donald Trump will not run out. Tomorrow, the US will release the unemployment rate for May, which will rise to 19.8% according to forecasts. Average hourly earnings in May will grow by just 1% on a monthly basis after increasing by 4.7% a month earlier. On an annual basis, however, an increase of as much as 8.5% is expected. The most important and significant Nonfarm Payrolls report, the number of new jobs created outside of agriculture, is expected to be -8 million. Thus, firstly, we believe that all statistics from across the ocean will in any case be weak because the language does not turn out to call negative values of indicators and reports, even if they are better than forecasts. Second, market participants may again ignore all these reports and data. Third, the US dollar is falling into the abyss without the help of statistics. Thus, the technical point of view is now the most important, since it makes no sense to try to guess when the fall of the US currency will stop. Quite unexpectedly for many, the US dollar ceased to be a protective asset that traders and investors bought to avoid additional risks. Even when the US stock market fell into the abyss, the US dollar still managed to get more expensive. Now we are faced with a completely opposite situation when market participants are trying to get rid of the dollar. Therefore, traders are now advised to follow the general trend, and not try to guess a possible turn down. The hourly chart (illustrations are available in the articles “last-minute forecasts”) clearly shows that the pound/dollar pair came close to the maximum from April 14 and 30. If the level of 1.2642 does not deter buyers of the pound, the upward movement may continue with a new force. 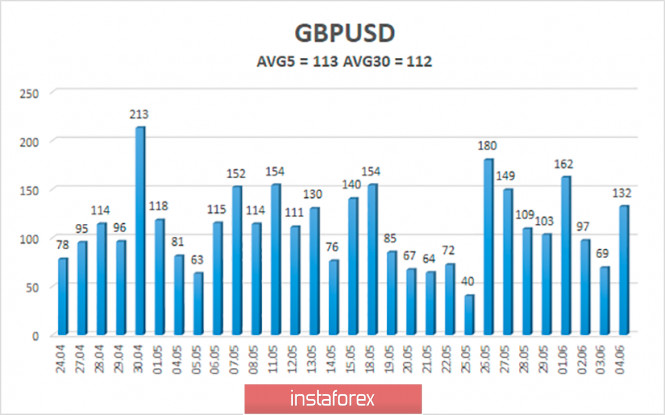 The average volatility of the GBP/USD pair continues to decline in general and is currently 113 points. For the pound/dollar pair, this indicator is “high”, but not too high. On Friday, June 5, thus, we expect movement within the channel, limited by the levels of 1.2501 and 1.2727. Turning the Heiken Ashi indicator down will indicate a new round of corrective movement.

The GBP/USD pair resumed a fairly strong upward movement on the 4-hour timeframe. Thus, today it is recommended to continue trading the pound/dollar pair for an increase with the goals of 1.2695 and 1.2727 and keep the longs open until the Heiken Ashi indicator turns down. It is recommended to sell the pound/dollar pair when the bears manage to return to the area below the moving average, with the first targets of 1.2390 and 1.2329.

The material has been provided by InstaForex Company – www.instaforex.com
Source: Overview of the GBP/USD pair. June 5. Donald Trump was not supported by former US presidents, the head of the Pentagon, and