Home » Forex Technical Analysis » Overview of the GBP/USD pair. June 9. The UK is getting closer and closer to a complete failure in negotiations on a "deal"

The British pound also began to adjust on the first trading day of the week. However, the correction did not last long and it was extremely weak. Moreover, towards the end of the day, the upward movement resumed. In general, the upward trend remains, and within the correction, the pound/dollar pair has not yet reached even the moving average line. Thus, at the end of Monday, the technical picture has not changed at all. In recent years, we are increasingly asking ourselves the question: what is the reason for the strengthening of the British pound? If the growth of the euro currency can still be explained logically, it is not possible to do this with the British currency. The fact is that the EU economy, although experiencing certain problems due to the “coronavirus crisis”, nevertheless, they are comparable to the US. This means that the euro may well become more expensive now against the dollar because of the political crisis, racist scandal, rallies, protests, and riots that are happening now in the United States. But in the case of the pound, the situation is completely different. First, as we have already discussed in the articles “last-minute forecasts” for the pound, the COT report showed the strongest reduction in buy positions among professional market players. In other words, major banks and investment funds that operate in the foreign exchange market to make a profit have been trying their best to close as many purchase contracts as possible over the past 10 days. Usually, a reduction in the number of contracts by almost 13 thousand (although their total number was about 42 thousand) causes a strong fall in the currency, unless the same volume of contracts for sale has not decreased. The latest COT report showed a minimal change in the number of contracts for sale among speculators. Thus, we have a rather strange situation when speculators dumped purchases, in total, more new contracts were opened for sale than for purchase, and the British currency managed to get very expensive. Secondly, the British economy has been experiencing serious problems in recent years due to Brexit. Neither the American economy nor the European economy has such a problem. And if there is no “deal” with the European Union, then from 2021 Britain will start trading with the Alliance (which accounts for more than 50% of exports) under WTO rules, that is, with duties and tariffs. Of course, London will also have certain profits and preferences from the absence of a “deal”. For example, British waters will not be available for EU countries to catch fish and seafood in them. Thus, Britain will have a kind of monopoly on this fishery compared to many EU countries. But this potential and profit still need to be realized, which can also take years.

Last week, the fourth round of negotiations between Brussels and London on the future relationship after the final “divorce” ended. In principle, the words of Michel Barnier are enough to describe the results of these negotiations: “I must tell the truth and it is that there has not been any significant progress in the negotiations this week.” Michel Barnier also added that the EU will not agree to an agreement that will affect the integrity of the single market in the future. Also, the chief negotiator from the Alliance said that London is retreating from the commitments it made earlier, which significantly complicates the negotiation process. It is noted that the key unresolved issue is the access of European vessels to British waters for fishing in them.

Meanwhile, China has responded to Washington’s accusations that it is trying to “delay or sabotage” the development of a vaccine against “coronavirus”. Official Beijing asked to show proof of the words of American officials. “Since this Senator (Rick Scott) claims that the US has evidence of China’s attempts to undermine the research and development of the COVID-19 vaccine, we ask him to present this evidence, there is no need to be shy,” said a Chinese Foreign Ministry official. The diplomat also said that “the development of the COVID-2019 vaccine is not a battle between China and the United States, but a battle between humanity and the virus, and regardless of which country first completes research and development of the vaccine, it will be a significant contribution to the fight of humanity against the pandemic”.

On Monday, no important macroeconomic information was published in either the United States or the UK. However, last Friday showed that for traders, it does not matter what kind of statistics are received, the pound continues to rise in price at this time. No major reports are scheduled for Tuesday in the UK and the United States again. 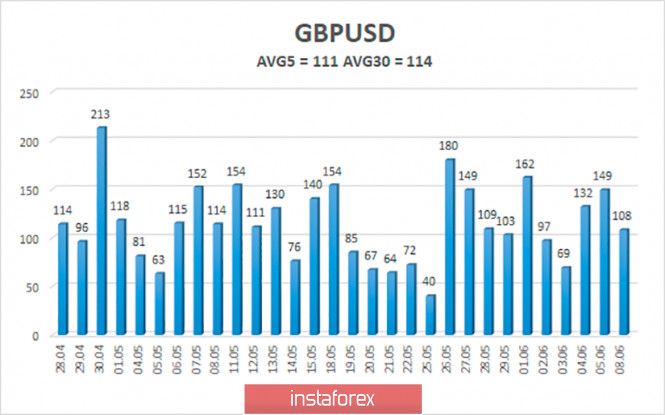 The average volatility of the pound/dollar pair continues to decline in general and is currently 111 points. For the pound/dollar pair, this indicator is “high”. On Tuesday, June 9, we expect movement within the channel, limited by the levels of 1.2622 and 1.2844. Turning the Heiken Ashi indicator down will indicate a new round of corrective movement.

The GBP/USD pair resumed a strong upward movement on the 4-hour timeframe. Thus, today it is recommended to continue trading the pound/dollar pair for an increase with the goals of 1.2756 and 1.2817 and keep the longs open until the Heiken Ashi indicator turns down. It is recommended to sell the pound/dollar pair when traders manage to return to the area below the moving average, with the first targets of 1.2512 and 1.2451.

Source: Overview of the GBP/USD pair. June 9. The UK is getting closer and closer to a complete failure in negotiations on a "deal"