The main focus today was on the decision of the European Central Bank, as well as on the forecasts of economists on the growth prospects of the Eurozone economy. There were also many questions about whether the ECB would increase its emergency asset purchase program, and if so, to what level.

But the asset repurchase program is not so simple. The report indicates that the regulator has increased the emergency program for purchasing PEPP assets by 600 billion euros at once, while the best forecasts of analysts showed a figure of no more than 500 billion euros. Thus, the aid now amounts to 1.35 trillion euros, as previously the program assumed purchases worth 750 billion euros. The money will be used to buy back debt (bonds) that will be issued this year by Eurozone governments to fight the pandemic and its consequences. This means that the fight against the consequences of the pandemic will be conducted rigidly and uncompromisingly, which will take a huge amount of money. This decision will also ensure market stability, as we cannot expect other assistance programs to be adopted yet. In this case, we are talking about a Franco-German agreement for 500 billion euros and a proposal from the European Commission to raise the amount of 750 billion through financial markets. This has been said many times, and there is no point in repeating it.

As for the purchase of bonds under the normal asset purchase program, they will continue in the amount of 20 billion euros per month. But as for the timing, this program will last as long as necessary. If the situation deteriorates or improves, then the regulator will easily be subjected to the adjustment of all your tools.

During her speech, the ECB President said that the Eurozone economy is facing an unprecedented contraction, but there are first signs of reaching a bottom. This is about the same conclusion we made recently when we published reports on business activity in the manufacturing and services sectors.

Christine Lagarde also noted that economic forecasts are surrounded by extreme uncertainty, but stimulus measures aimed at supporting the economy during its launch will help to start a fairly active recovery. However, most likely, based on the data that have been analyzed recently, it will be possible to talk about a more serious recovery in economic activity only in the 3rd quarter of this year. The head of the ECB also expressed hope that the planned EU fund for economic recovery will still be approved.

Lagarde could not avoid a question related to the recent decision of the German Constitutional Court in the framework of the Bundesbank’s exit from the asset purchase program conducted by the European Central Bank. However, the answer to this question was clearly ready, since the Governor made it clear that this decision applies only to the government and the Central Bank of Germany. At the end of her speech, Christine Lagarde said that the governing council was united in its opinion on the need to take action, referring to the expansion of the asset purchase program by 600 billion euros. 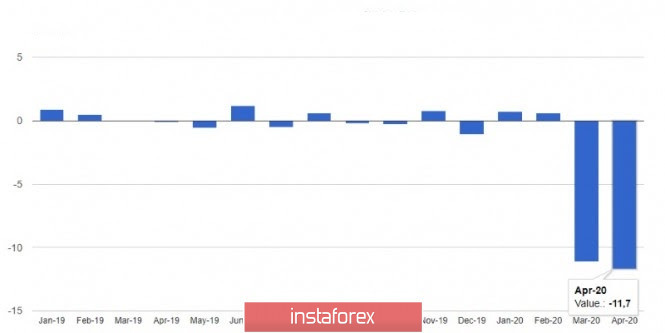 Today, a report on retail sales in the Eurozone was also released, which saw the strongest decline in history. However, it is worth noting that the fall was much less than expected by economists. According to the data, sales in April compared to March fell by 11.7% after falling by 11.1%. In April, compared to the same period last year, sales fell by 19.6%. Economists had expected sales to fall by 19% in April compared to March. I think the reasons for such a sharp decline in the indicator are clear to everyone.

As for the technical picture of the EURUSD pair, even in the morning forecast, I paid attention to the high probability of growth of the European currency. An attempt to break through the 1.1255 resistance only increased the interest of speculators in risky assets, which may lead to the formation of a new bullish momentum of the pair in the area of highs 1.1295 and 1.1350.

Source: Results of the ECB meeting: 1.35 trillion euros to help the Eurozone countries. The ECB increases the emergency PEPP program