The Russian ruble is sweeping away all obstacles thanks to the continuous growth of US stock indices, oil, and the euro. Inspired by the EU’s large-scale fiscal stimulus and hopes for the QE expansion, the euro has been strengthening against the US dollar for 11 trading days. The weakness of the US dollar is another confirmation that the global economy is recovering. If so, the demand for currencies of emerging markets is likely to continue growing.

Despite the difficult epidemiological situation in Brazil, Russia and Mexico, the real, the rouble and the peso are strengthening against the US dollar amid sell-offs of the latter. Investors believe that on the eve of the presidential election, Donald Trump will not launch a new round of the trade war with China and that the Fed’s massive monetary stimulus is long-term. Milton Friedman once argued that there was nothing more permanent than an interim government program. The balance of the Fed in March-May increased by 70% and reached $7 trillion, which, along with the desire of investors to get rid of safe-haven assets, is putting serious pressure on the US dollar.

An equally important bearish driver for USD/RUB is oil. When WTI fell below zero, the Kremlin became seriously worried about the Russian budget’s ability to withstand such a collapse in the oil market. In order to keep balance, Moscow needed Urals for 2,700 roubles each. At the beginning of summer the local oil grade returned to this level. The cooperation between the Russian Federation and Saudi Arabia within the framework of OPEC+ to reduce production and restore global demand are bearing fruit and contribute to the strengthening of the rouble.

A rather controversial situation has developed in the field of fiscal stimulus used to combat the pandemic. In Russia, it does not exceed 3.8% of GDP, which is significantly lower than in other emerging markets. Not to mention the developed ones. In the eurozone, the ratio of fiscal stimulus to gross domestic product is about 13%. On the one hand, such generosity of governments should theoretically lead to faster economic recovery; on the other hand, the public debt will grow and the process of economic recovery to the previous trend will face serious obstacles. 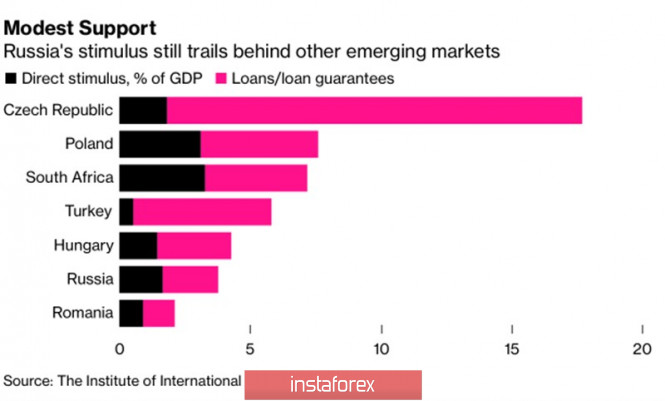 In the summer, tourism can provide additional support to the rouble. According to Bloomberg Economics, the annual expenses of Russians on trips to Turkey, Finland and Thailand exceed all revenues from foreign tourists by $20 billion. Passenger traffic due to the pandemic will fall by at least 50%, and a decrease in domestic demand for dollars, euros and other currencies are beneficial for the rouble.

Technically, on the daily USD/RUB chart, bears are in control of the situation. In case of a breakout at the support level of 68.75 and 68, the pair is likely to continue its downward movement with the targets at 261.8% and 161.8% according to the AB=CD and Crab patterns. It is better to keep your Short positions formed from the 75.25 and 76.7 levels as well as and increase their number on pullbacks. 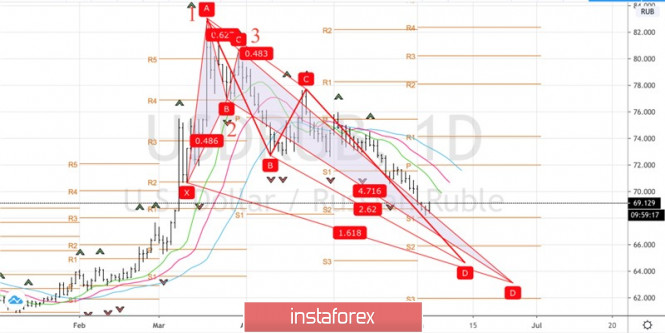 Source: Russian rouble to benefit from decrease in demand for foreign currencies