Home » Forex Technical Analysis » #SPX stock markets, trading signals, feast during the plague and the cure for it #GILD

Dear colleagues. What is currently happening on the stock markets gives me a strong sense of deja vu, because we already saw something similar in 2011-2012, only to a much lesser extent. Although it seemed unbelievable then, the essence of what is happening with stock markets around the world was akin to insanity and was described by the phrase “the worse, the better.” Then the worse the data on the US economy came out, the more the US stock market grew in anticipation of new injections from the Federal Reserve. Today we see something similar, only in much larger – global volumes.

The unemployment data all over the world comes out horrific, hundreds of millions of people all over the world lost their jobs overnight, the number of unemployed in the US alone reached 36 million. Many sectors of the economy, such as air travel and tourism, have been thrown back decades. The leader of the “free” world can not cope with the epidemic of the COVID-19 virus for the third month, and the number of victims has already exceeded 100,000. However, stock markets have almost recovered their losses by 2/3 of the February record highs and continue to grow.

The leaders with exceeding the previous highs of March 4 were the Information Technology Sector (INFO TECH), where AMD (#AMD), which has Wtd Alpha +141.80, and Apple (#AAPL), which possesses the strongest growth indicators, Wtd Alpha +73.00.

Also, following the results of two months of the second quarter, the Health Care sector emerged as the leader, where the company Gilead Sciences Inc (#GILD), available for trading in the InstaFOREX terminal, which has Wtd Alpha +20.50, showed a very worthy result. Since this company has developed an interesting technical model at the moment, I will consider it in more detail.

Gilead Sciences, Inc. is a biopharmaceutical research and development company that seeks, develops and commercializes innovative medicines in the fields of unmet medical needs. The company seeks to change and simplify the care of people with life-threatening diseases around the world. Gilead’s product portfolio and range of products includes treatments for HIV/AIDS, liver disease, cancer, inflammatory and respiratory diseases, and cardiovascular diseases. The company is included in the Nasdaq 100 and S&P 100 indices. At the same time, for a long time, the company’s shares have brought investors income below these indices. However, everything changed in 2020, when the company’s shares began to grow rapidly.

Consider some of the fundamental indicators of Gilead Sciences Corporation and conduct its general fundamental analysis. Earlier, I mentioned the Weighted Alpha indicator, which characterizes the strength of the company’s growth over the past year. This indicator is #GILD low, but not low. The leader in the Health Care sector is Regeneron Pharmaceuticals, which has a Wtd Alpha of +108.90. However, companies with high weighted alpha are usually very overbought, and, in my opinion, buying stocks of these companies is like trying to catch up with an outgoing train.

Gilead Sciences, Inc. refers to the mastodons of financial markets and has a capitalization level of over 90 billion dollars. Annual sales are at $20 billion. Earnings before tax for EBITDA in 2019 amounted to $ 12.486 billion. Forecast for profit for 2020 is 11.514 billion. The company is relatively cheap, the earnings per share Price/Earnings ttm is 12.18, according to some estimates, 25.5, which in any case is acceptable for the performance of a company in this sector. Indicators of debt on equity are 1.02. Profitability is estimated at 23.99%. An excellent bonus for a long-term investor is the high, by the standards of the United States and the sector, dividends of 3.61%. The growth in the value of shares over the past year is 18.66%. An important positive factor is the fact that the Beta indicator for 60 months is at 0.70. This suggests that #GILD shares are dependent on changes in the Nasdaq 100 and S&P 100 base indices by 70% or less volatile. 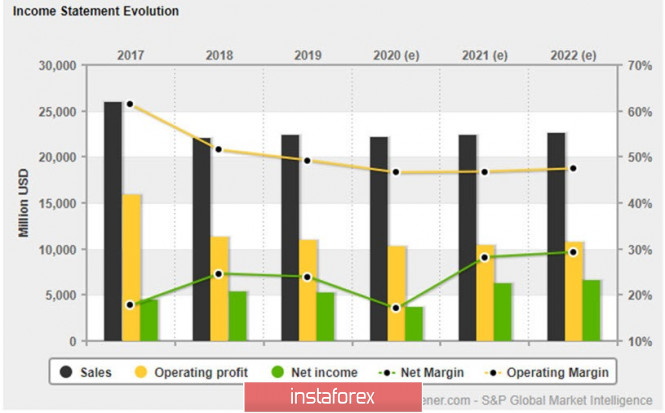 As follows from the daily chart (Fig. 1), in January 2020, the company’s shares moved into an upward trend and in mid-March, against the backdrop of the development of the COVID-19 epidemic, peaked at $85.86, after which they began to decline. Unsuccessful recovery attempts were made in April and May, after which the company’s shares gradually fell to the level of the semi-annual moving average line, while remaining in an upward trend, as evidenced by the established April low at $71.30. The closing of the price of the week below the level of 120 MA also did not occur. At the same time, the indicators of the RSI indicator (5) exceeded the indicators of the RSI indicator (20), which in my trading system implies a signal to buy #GILD shares.

However, when deciding on the purchase of #GILD shares, traders should be guided by the signals of their own trading systems, observing the rules of money management and proceeding from the principle: the movement will continue until we get the opposite.

Values of 85.60, 89.15 and 94.50 can be selected as targets. In case the company’s shares decrease, losses must be recorded when the week price is closed below the 71 level, when the target is selected at a value of 85.60, or when the day price is closed below the level of 64, if the values 89.15 and 94.50 are selected as targets. Choosing a target at the level of 85.60 and setting a loss fixing point at level 64 will be the wrong decision, because profit should be greater than possible losses, which, however, does not prohibit early closure of positions in case the situation changes, unless, of course, the signals of the trading system indicate this, not the trader’s intuition.

The National People’s Congress of China approved the National Security Act on Thursday, May 28, aimed at curbing separatist and subversive activities in Hong Kong. In response to the passage of the law, US Secretary of State Mike Pompeo said that Washington can no longer treat the former British colony as independent from Beijing, which violates its trade and financial status. Donald Trump’s press conference is expected on Friday evening, and it is possible that the US president will announce new sanctions and tariffs on China. This could trigger a new round of trade war and a wave of decline in stocks across all global stock exchanges. However, despite concerns, investors are at a stage of optimism, primarily due to the actions of the US Federal Reserve and other central banks, which are taking measures to unprecedentedly pump markets with liquidity.

On Wednesday, the European Commission adopted a package of incentive measures worth 750 billion euros, investors expect a similar step from the European Central Bank, a meeting of which should be held next week, June 4. Be careful and careful, let the coronavirus pass us.

Source: #SPX stock markets, trading signals, feast during the plague and the cure for it #GILD