The worst trading day for US stock indices since mid-March forced the EUR/USD bulls to retreat. The main drivers of the euro’s strength at the turn of spring and summer were the epic rally of the US stock market, which contributed to the sale of safe-haven assets, and large-scale incentives of the EU and ECB, the implementation of which will smooth the recession of the Eurozone economy. Europe is once again united, and the long-term prospects for the dollar due to the growth of the double budget deficit and the current account are by no means encouraging. However, any trend needs correction, the question is, how deep will it be?

Obviously, the 40% increase in the S&P 500 from the levels of the March bottom looks excessive. Speculators got too carried away with the idea of a V-shaped recovery in the US GDP and bought shares like hotcakes. The White House strongly supported the hovering market sentiment, and when the Fed at the June meeting issued gloomy forecasts about the long process of recovery of the American economy, Donald Trump went back to his old ways. He renewed his criticism of Jerome Powell. They say that the Fed often made mistakes with the assessment of the situation.

Of course, the US President in the run-up to the election needs the S&P 500 not only to go into the green zone from the beginning of the year but also to update the record high. In this scenario, we can say that the United States has won the pandemic, and guarantee victory. This circumstance suggests that the correction of stock indices will be short-lived. If so, the USD index will continue to go down. In my opinion, the inverse correlation of the S&P 500 and the dollar is serious and lasting. The Fed’s large-scale swaps with other central banks have reduced the need for dollar liquidity. At the same time, the volume of operations does not reach the levels of the previous economic crisis: by the end of the first week of June, foreign central banks had spent about $ 447 billion, at the peak of the recession in 2008-2009, it was about $ 583 billion.

Dynamics of the Fed’s currency swaps with other central banks

Having satisfied the need for foreign partners in the US currency, the Federal Reserve simultaneously reduced the cost of hedging. Now European asset managers can buy US stocks with a clear conscience and simultaneously sell US dollars as part of price risk insurance operations. Previously, costs were too high, which forced speculators to abandon such transactions and contributed to the strengthening of the direct correlation between the S&P 500 and the USD index. Curiously, the reduction in the cost of hedging purchases of American assets indicates a serious underestimation of the euro.

Dynamics of EUR/USD and the cost of hedging 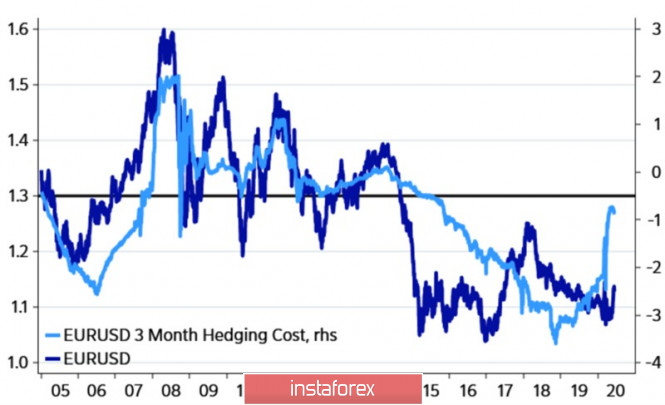 Thus, the average and long-term prospects of the “American” do not look very good, which allows you to buy the main currency pair on pullbacks.

Source: The Fed took care of the dollar