Home » Forex Technical Analysis » Trading recommendations for EUR/USD on May 29, 2020

From the point of view of complex analysis, we can see the first radical change in the trading chart in two months.

The trading week is drawing to a close, so it’s time to take preliminary results. The past trading days were extremely dynamic. Market participants opened long positions from the pivot point 1.0885, pushing quotes quickly to the upper border of the flat 1.0775 // 1.0885 // 1,1000. Quotes then manage to break out of the channel, recording the first radical change in the market for two months. The flat, which held back market participants for a long time, no longer plays a huge role in the market.

The bearish mood was already discussed before, but was not counted on due to the crisis caused by the coronavirus pandemic. Thus, everyone was surprised with the impressive movement, bringing forth questions such as: what has changed? And have the effects of quarantine in Europe disappeared? In addition, the global trend remains downward, so the baffling baffling upward trend of the euro really shocked investors.

With this activity, only one conclusion can be drawn. Trading positions at the present time should be considered exclusively with a local perspective, before the normalization of the situation in the world relative to the current crisis.

That is, it should not be ruled out that soon, quotes will again return to the area of 1.0775 or lower, and then return back to the original coordinates.

In terms of volatility, the dynamics remain stable, in which the daily indicator does not fall below 80 points. This indicates an acceleration in the market.

As discussed in the previous review, traders considered price fluctuations within the range of 1,0990 / 1,1040, working on the breakout of quotes from the established boundaries.

The trading idea on Thursday regarding local operations from the borders 1.0990 / 1.1040 was successfully conducted, which increased the trade deposit.

Meanwhile, looking at the daily chart, we can see that the fluctuation of quotes, which began on March 20, signals a bullish mood, particularly if quotes consolidate above 1.1180.

The news published yesterday contained important macroeconomic data on the United States, which played a major role in the dynamics of the market. A strong impact on market participants was made by the second estimate of US GDP for the first quarter, where the economic slowdown was -5.0%, up from the forecast of -4.8%. Data on durable goods was also published, which revealed a -17.2% drop in the index. With such indicators, recovery of market sales seem far to reach, especially since housing transactions also recorded a decline of -33.8%.

Although the data led to a sharp weakening of the US dollar, the statistics help normalize the market sentiment.

The weekly report on US unemployment was also published yesterday, from which, for the first time in ten weeks, the number of repeated applications did not grow, but was still catastrophic at 21,052,000.

Initial applications, meanwhile, turned out worse than the forecast, but nevertheless decreased from 2,446,000 to 2,123,000.

Based on the report of the US Fed, the mass unemployment is compounded by the fact that many people in the country do not want to go back to work. The reasons for which are: health problems, difficulties arising from the inability to leave children unattended (kindergartens, schools and summer camps are still partially limited), and too generous unemployment benefits.

In Europe, Commissioner for Trade Phil Hogan said that England had already abandoned the prospect of concluding a trade agreement with regards to Brexit, revealing that there was no progress in the negotiations.

“At present, we are not making significant progress. Perhaps, the United Kingdom has come to the conclusion that there will be no deal, “the Commissioner said. “Nevertheless, we hope that on the part of the UK, we will see more efforts than we have seen so far to advance on certain issues. Speed is important because time is short, “he added.

A new round of negotiations regarding Brexit is scheduled for June 1. It is in many aspects, decisive, since the extension of the transition period is coming to an end. For this reason, British Prime Minister Boris Johnson is planning to personally visit Brussels in the second half of June to resolve issues.

Meanwhile, the preliminary data on inflation in Europe was published today, where a decrease from 0.3% to 0.1% was recorded, up from the forecast of 0.2%.

The inflation figures are indicators for the ECB, from which they base on the actions they take for economic recovery.

The upcoming trading week promises to be busy. Data on the PMI is expected to come out at the beginning of the week, after which the report of ADP on US unemployment will be published on Wednesday. Meanwhile, the ECB will conduct its meeting on Thursday, and on Friday, the Department of Labor will release its report on US unemployment.

The most important events next week are listed below: (UTC + 1)

US 13:30 – Applications for unemployment benefits

US 13:30 – US unemployment report (by the US Department of Labor)

Analyzing the current trading chart, we can see the upward trend, during which the quotes consolidated above the level of 1.1080 and moved upwards even further. Market participants seem to have aimed for the local high of March 27 – 1.1147, which is the level of the earlier fluctuations. The main resistance most likely will be the level of 1.1180, where stops were systematically placed.

It seems that the bearish mood will remain for a long time, so carefully analyze the dynamics within the range 1.1150–1.1190. Lookout for slowdowns and possible rebounds.

Based on the above information, we derived these trading recommendations: 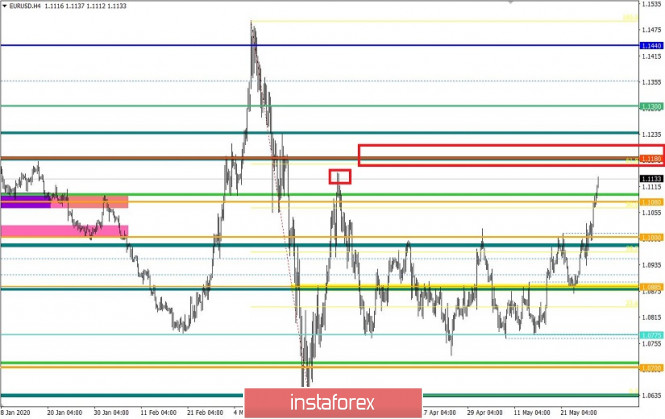 Analyzing the different sector of time frames (TF), we can see that due to the latest movement of the quotes, the indicators of the technical instruments unanimously signal a bullish mood. 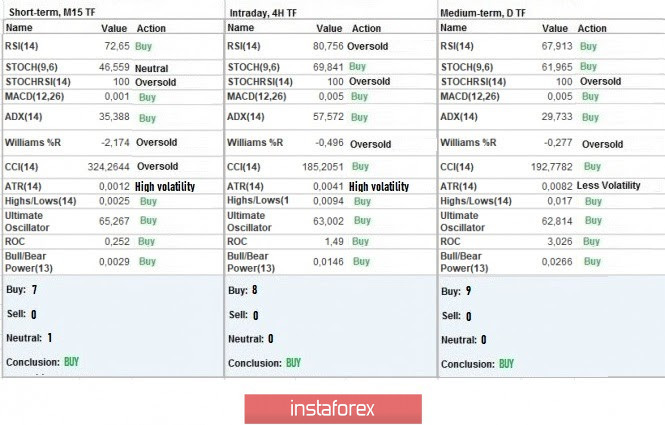 (May 29 was built, taking into account the time of publication of the article)

Volatility is currently 68 points, which is already a lot for this time period. Thus, we can assume that speculative sentiment will continue to maintain acceleration status. 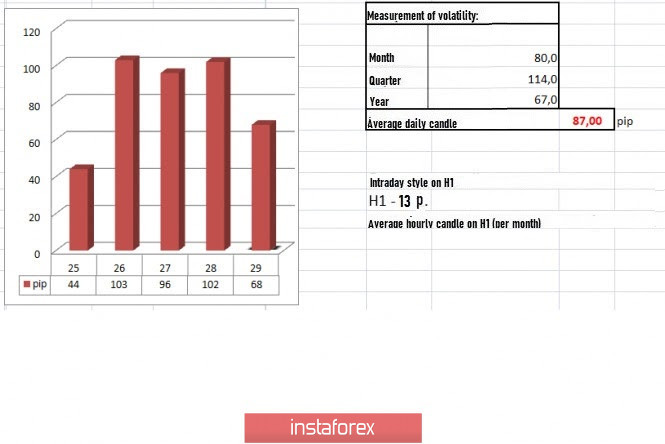 Source: Trading recommendations for EUR/USD on May 29, 2020