From the point of view of complex analysis, we can see high pressure on long positions due to the convergence of quotes with the area of interaction of trading forces.

Last trading week maintained the previously set bullish mood, the result of which is the quotes managing to change the tact of the two-month flat pattern. The acceleration from 1.1000 / 1.1080 led to the breakdown of 1.1147, March 27’s high, which became the signal to complete the fluctuation in the chart. The bulls, having two advantages in their sleeves, were able to push the quotes past the level of 1.1180 to the level of 1.1300, which ultimately led to the convergence of prices with the area of interaction of trade forces 1.1440 / 1.1500. Such movements somehow put pressure on long positions.

The closing of quotes was very interesting, the most intriguing of which is that the EUR / USD pair managed to change the market ticks. The quotes managed to breakout from the upper border last Friday, resulting in a change in tact from the flat pattern. The changes suggest that the market is either eyeing new levels of fluctuations, or that speculative interest has exceeded the expectations. Both theories have their confirmations, with the former referring to market tacts, while the latter refers to the emotional mood of the market, where the coefficient of speculative positions has been stable at a high level for a very long time.

To continue the bullish mood and changes in fluctuation levels in the market, the quotes must consolidate above the area of interaction of trade forces 1.1440 / 1.1500. Otherwise, the fluctuation will not receive the proper amount of volumes, and the market will again return to the initial limits of fluctuation, where history has already demonstrated a similar scenario.

Looking at the details of trading last Friday, we can see that the quotes updated the local weekly highs [1.1383] at the start of the European session, but after which the quotes reversed to the lows of 1.1278.

As discussed in the previous review , traders expected a similar movement in terms of stopping long positions due to the strong interaction area of the trading forces 1.1440 / 1.1500. The only thing that did not fully coincide was the value of correction, which, according to calculations, should make up 30% of the total movement.

In terms of volatility, a 20% acceleration was recorded relative to the average daily indicator, with the past week reflecting high dynamics at an amount of 100 points.

In the daily chart, we can see a high similarity between the current movement and the movement of February 21, where the rate of change is slightly lower, but overheating of long positions is visible.

Meanwhile, the news published last Friday contained data on the US labor market, where, according to the report published by the US Department of Labor, unemployment rate fell from 14.7% to 13.3% in May, better than the forecast of 19.7%. New jobs also fixed to 2,509,000, which is an absolute record in terms of US statistics. The data are very positive, which inspired investors, resulting to the US stock market turning green on Friday.

Today, no significant macroeconomic reports in Europe and the US that could affect the dynamics of forex rates are available.

Analyzing the current trading chart, we can see a slowdown in quotes within the limits of the amplitude 1.1280 / 1.1320, which has been taking place on the market as early as 20 hours. The stop is a kind of accumulation, in anticipation of the subsequent acceleration.

The correction seems to not have given the market the scale that many are hoping for, so further movement towards 1.1180 should still be considered. With regards to accumulation and local operations, the best tactic is to work on a breakout from the limits 1.1280 / 1.1320.

Thus, based on the above information, we will present these trading recommendations: 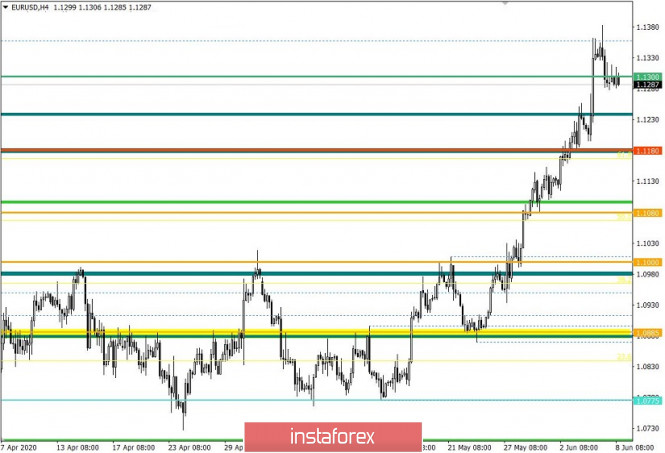 Analyzing the different sectors of time frames (TF), we can see that the indicators of hourly and daily periods still signal buy, which is confirmed by the movement of quotes to the area of 1.1300. 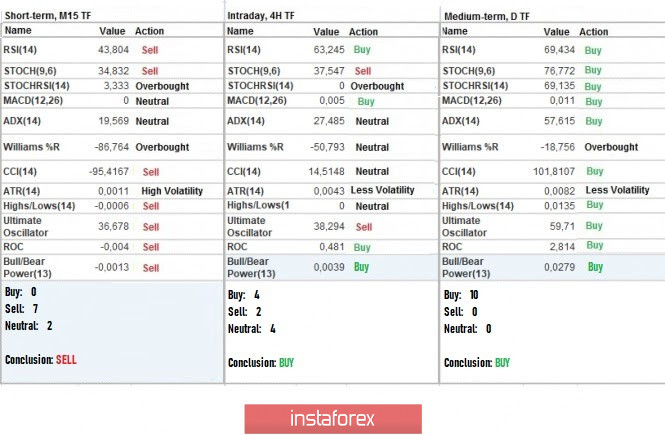 (June 8 was built, taking into account the time of publication of the article)

The volatility of the current time is 38 points, which is still low for this time period. However, volatility may double, if the quotes breakout from the range of accumulation. 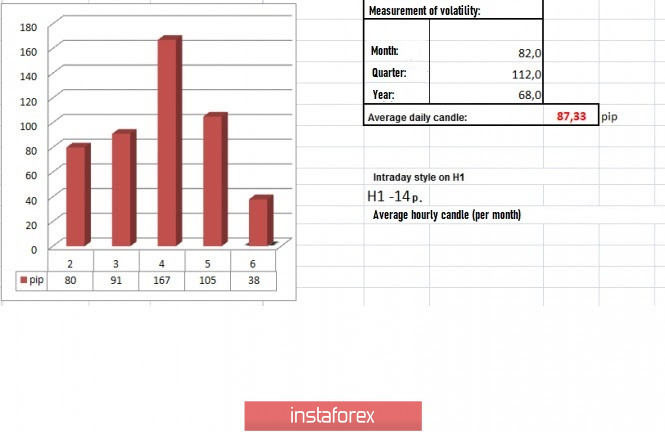 Source: Trading recommendations for the EUR/USD pair on June 8, 2020